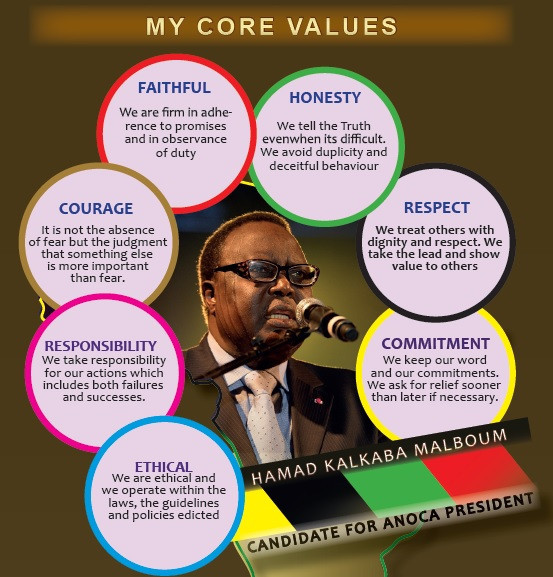 Hamad Kalkaba Malboum has vowed to repair the reputation of the Association of National Olympic Committees of Africa (ANOCA) as he insisted the past will not harm his bid to become President of the continental body.

Malboum is one of four candidates, alongside current ANOCA vice-president Mustapha Berraf, International Olympic Committee member Lydia Nsekera and Botswana's Negroes Kgotsietsile, who are standing in an election scheduled to be held in Tokyo next week.

The Cameroonian official was cleared to enter the race by the Court of Arbitration for Sport (CAS) after winning an appeal against the ANOCA Executive Committee's controversial decision to exclude him.

He was initially declared ineligible following allegations of bribery and illegally using the Government in Cameroon to campaign on his behalf, which he denied.

Malboum, a member of the International Association of Athletics Federations Council, told insidethegames ANOCA's previous actions against him would have "no impact whatsoever" on the outcome of the election.

"I took the CAS verdict with humility," he said.

"I took it as someone who has practiced sport and who has managed sports.

"I usually take the example of sportsmen and women who play football or any other game.

"Decisions are sometimes wrongly taken against them but the game continues and at the end of the match they exchange jerseys and hug each other.

Malboum claimed he will "take ANOCA to another level" if he is elected President, pledging to make the organisation the "driving force behind the development of sport and the promotion of Olympism in Africa".

He said this could be achieved by "always putting our institution at the service of the Olympic and sports movement in general and of the National Olympic Committees in particular".

Uniting the various organisations involved in the All Africa Games, an event beset by turmoil in recent years, through stronger collaboration is another key aim.

"I will repair ANOCA’s reputation and develop sport across Africa by reconciling and uniting all the stakeholders around my vision to make ANOCA, the driving force behind the development of sport and the promotion of Olympism in Africa," he said.

"We will setup a workable synergy between ANOCA, African Sports Confederations and the African Union for the organisation of the Africa Games.

"We will also set up a framework for dialogue between African Ministers in charge of Sport and Presidents of African National Olympic Committees."

Malboum's manifesto largely focuses on five main targets - rebuilding trust, engaging through "great sport", attracting partners, mobilising Governments to increase their support for ANOCA and enhancing the promotion and relevance of the brand.

He also claims he will set up multi-sport zonal competitions across the continent as a development tool for sport in the region and establish high-performance training centres to improve Africa's medal tally at the Olympic Games.

The Presidential election is due to take place next Thursday (November 29) on the sidelines of the Association of National Olympic Committees General Assembly in the Japanese capital.