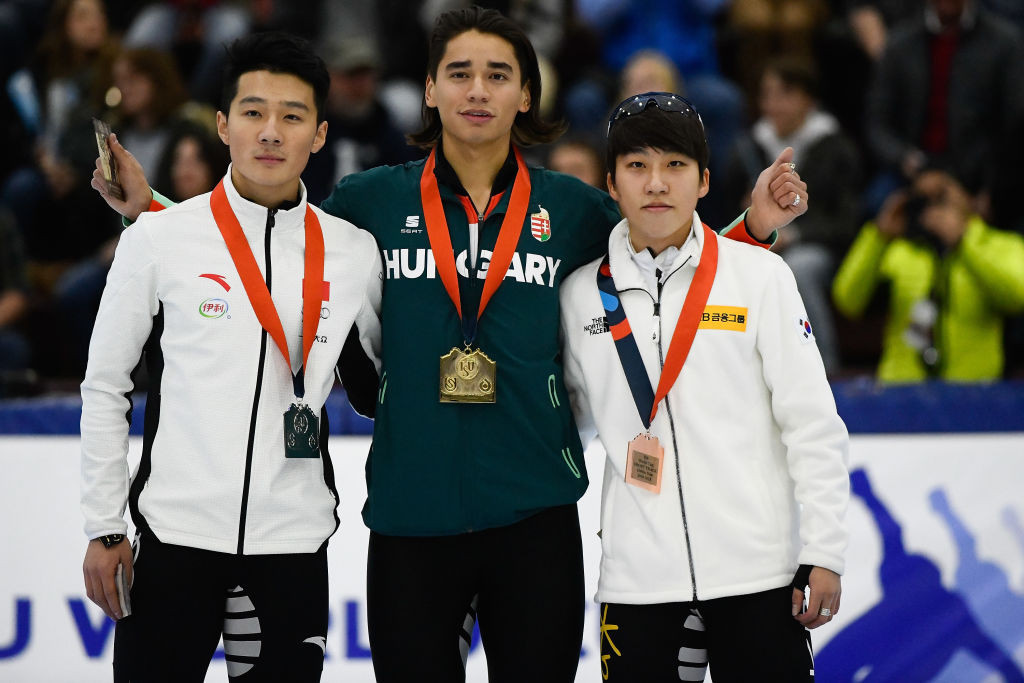 Medal action began at the Olympic Oval in Salt Lake City on the second day of the International Skating Union Short Track World Cup in Utah.

"My plan was to let him win," Shaolin said afterwards.

"I wanted him to stay at the top of the classification.

"So my plan was to try and help him as much as I could.

"I'd already agreed this with myself yesterday - he would win, and I would come second."

Before the race, Shaoang Liu was leading the World Cup classification standings after taking gold at the first World Cup of the season in Calgary.

Shaoang was leading the race before South Korea's Ji Won Park and China's Ren Ziwei made their moves and Shaolin felt he needed to respond.

Posting a time of 1min 24.571secs, Shaolin crossed the line first but his brother was unable to join him on the podium.

Shaoang was deemed to have impeded Park so received a penalty, leaving Ren and Park as the silver and bronze medallists respectively.

Ren and Park now top the overall World Cup standings, both with 14,400 points as Shaoang drops to third with 13,277.

With two silver medals in the World Cup series so far, Lee tops the classification leaderboard with 16,000 points.

Japan's Kazuki Yoshinaga sits in second on 10,180 points with today's winner Knegt in third with 10,144.

In the women's 1,500m, South Korea's Choi Min-jeong, a two-time Olympic champion at her home Pyeongchang 2018 Games, also found her form after returning from a knee injury to take gold in 2:20.859.

Choi's gold moves her up the World Cup classification rankings to the top spot with 14,096 points, as Suzanne Schulting of The Netherlands drops to second on 10,000.

Despite losing the top spot in the 1,500m, Schulting won the women's 1,000m race, as the reigning Olympic champion in the distance added to the two golds she won in Calgary.

The results from Salt Lake City mean Schulting and Prosvirnova cement their first and second places in the World Cup classification with 20,000 and 16,000 points respectively.

The final day of the World Cup is tomorrow.