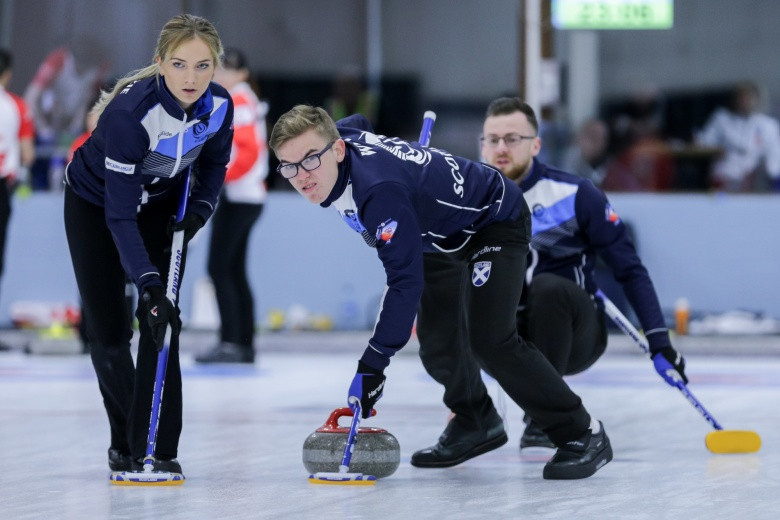 Defending champions Scotland have become the first team to qualify for the play-offs at the World Mixed Curling Championship in Canada after beating Kazahkstan tonight to remain unbeaten.

Their 10-3 victory at the Kelowna Curling Club tonight sealed their place in the next round as they now have six wins from six matches in Group A.

Germany share second place with Turkey after losing their first match today against England 4-3, as the Turks beat Belarus 8-3.

"We are happy for the win, but step by step next," he said.

Behind them Belarus, England and Hong Kong are all tied with two wins and three losses each, while Italy and Wales have each won twice and lost four times.

Kazahkstan are bottom having lost all their five matches so far.

In Group B it is Russia who lead and, just like Scotland, another strong performance today means they now have six wins from six.

Unlike Scotland, though, they are yet to seal their play-off spot, despite wins today over Ireland 8-3 and Austria 10-1.

Denmark sit behind them with four wins and a loss from five games.

They beat the United States today 9-5.

With the top three at the end of group play advancing to the play-offs, the third spot is currently shared by Australia and Finland.

The leaders in every group are still undefeated, with the top spot in Group C currently held by the Czech Republic.

Spain are second after beating Sweden today 7-3, meaning they now have four wins and a loss from their five games.

Afterwards their captain Sergio Ves claimed he was really pleased.

"We knew we could beat them if we played well and we did it," he said.

"It was a close game and I think it was a really nice game to watch from the outside too."

Sweden still sit third, despite that defeat, thanks to a bounce back win over Estonia 6-2 this afternoon.

Group play is due to continue tomorrow with Norway versus Slovakia starting proceedings in Group A.