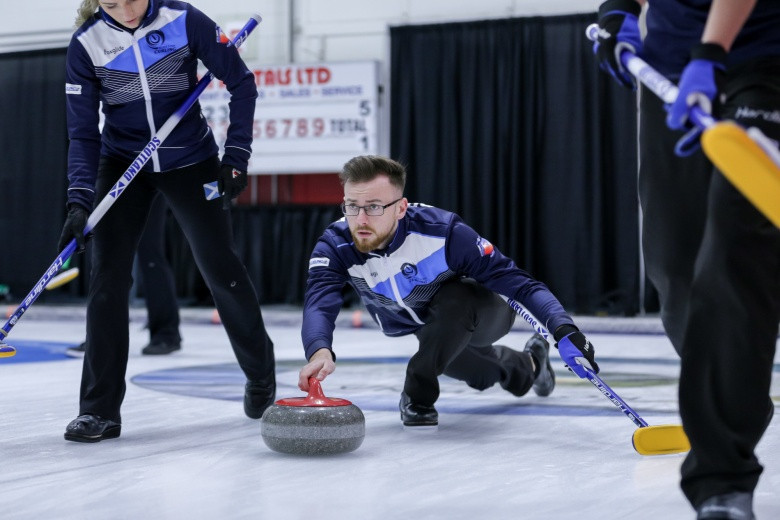 The race for play-off places is heating up at the 2018 World Mixed Curling Championships in Canada, as the round-robin phase reached the midway point in Kelowna today.

Across the four groups six teams remain unbeaten after three days of action at the Kelowna Curling Club.

In Group A both Germany and Scotland are yet to lose, with four wins each so far.

Germany won their only game today against Hong Kong, 8-2, while Scotland faced - and beat - two of their nearest rivals in England and Wales.

"We knew when we saw the draw come out that the home nations day was an exciting one to have," said their captain Robin Brydone.

"You know, playing against England and Wales, it was good to get two wins.

"It was our first two game day, so it was good to get wins on the board."

Sitting in the third play-off place are Turkey, with three wins and a loss.

They beat both Italy and Kazakhstan today, 4-2 and 5-2 respectively.

In Group B it is Russia that sit top with a perfect record.

They were another team to win two matches today, beating both the United States 8-3 and Switzerland in a tense match which required an extra end, 8-7.

Behind them Australia, Denmark and Finland are all tied for second.

In Group C the Czech Republic are the only team still unbeaten, having seen off Estonia today 9-5.

"We like the ice conditions, so we started pretty solid," their captain Lukas Klima said.

"It's not as good as we hoped we would play, so it's a pretty good start and we will continue to try and improve."

In Group C there is an even bigger tie for second between four teams.

They are Spain, France, Sweden and Chinese Taipei, who have all won three times and lost once.

In the final group, Group D, Norway are alone at the top with four wins.

Trailing them, also unbeaten but with only three wins, are Slovakia.

The hosts Canada are in third with one loss, which came against the group leaders.