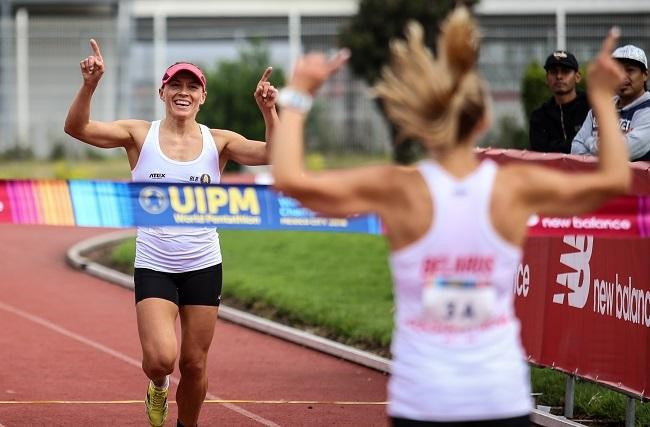 Belarus won the first gold medal of the Modern Pentathlon World Championships in Mexico City as they won the women's relay.

Iryna Prasiantsova and Anastasiya Prokopenko became the first winners ever at an "all in one" Pentathlon Stadium.

All of the disciplines were held at the same venue with the Belarus pair performing consistently throughout to triumph.

They lined up for the laser-run eight seconds behind South Korean leaders Yang Soojin and Choi Juhye but pushed past them to the line.

In the end the margin of victory was a comfortable 17 seconds over German silver medallists Ronja Steinborn and Annika Schleu, while Sofia Cabrera and Sophia Hernandez of Guatemala were a further 11 seconds back for bronze.

"I feel incredible, it's an amazing feeling because we are world champions," said Prasiantsova.

"It was not an easy day but we stuck together and managed to achieve everything we could."

Liudmila Tebekina and Svetlana Lebedeva of Russia were the best in the swimming as they clocked 1min 59.98, the only time under the two-minute mark.

Yang and Choi won the fencing ranking round with 33 victories with Prasiantsova and Prokopenko also strong on 29 wins.

Tebekina and Lebedeva also maintained a good start with 31 wins but they were eliminated after the riding.

Many of the main contenders suffered poor displays on horseback and it was Cabrera and Hernandez who did the most damage, pushing up the leaderboard with a fine score of 299.

All three medallists then quickly passed the Koreans during the laser-run.