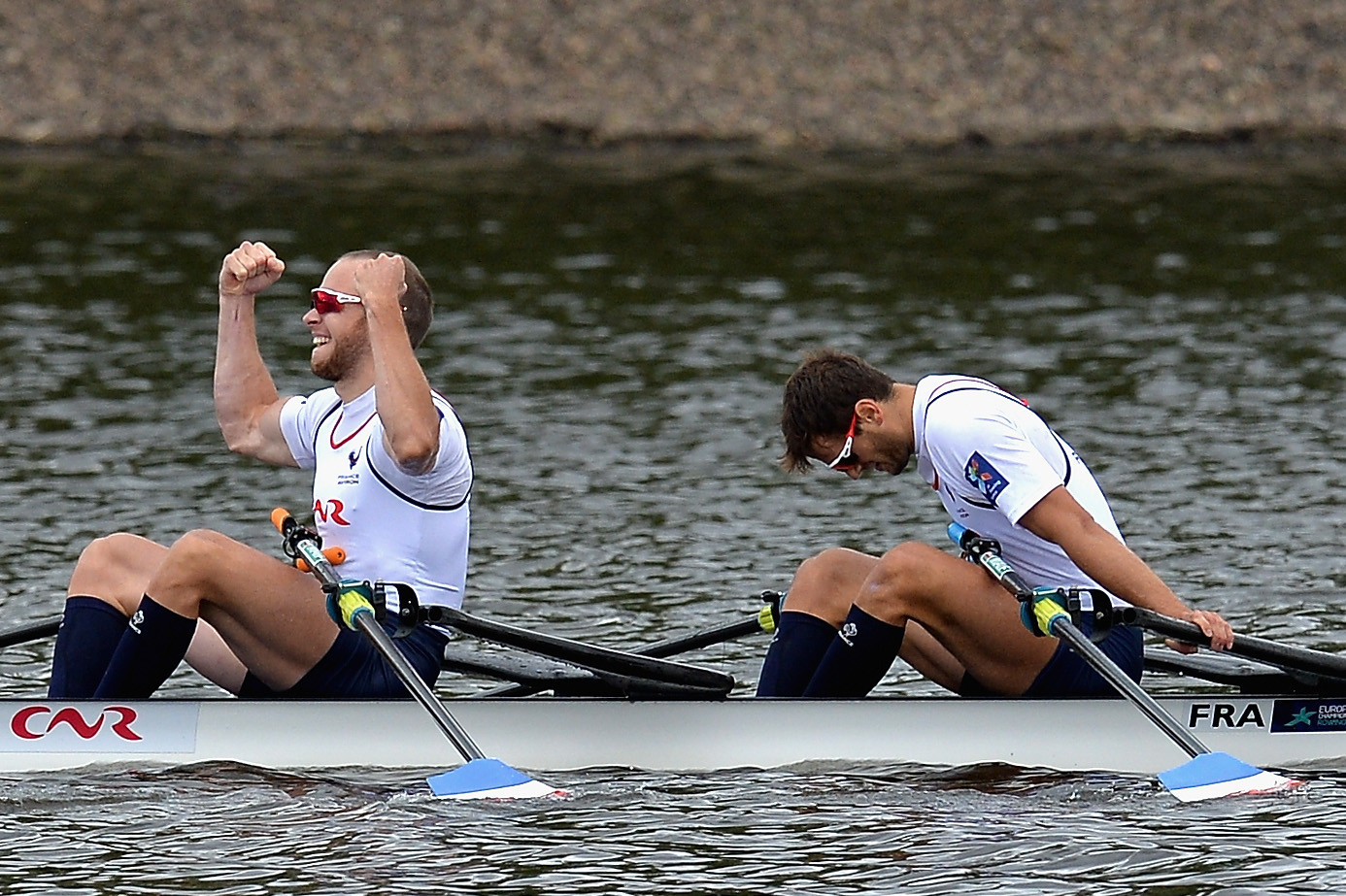 The double sculls event provided the tightest finish of the day, with four teams in contention to be crowned champions.

Boucheron and Androdias were able to clinch a narrow victory in a time of 6min 10.21sec, with the three medal winning crews ending less than one second apart.

Romania's Ioan Preundeanu and Marian-Florian Enache were just 0.5 seconds behind to win the silver medal, while Britain took the bronze as Harry Leask and Jack Beaumont finished in 6:10.84.

Poland missed out on a podium finish despite ending just one second adrift of the winning team.

He came out on top of a tussle with Italy’s Martino Goretti and eventually finished two seconds clear of his Italian rival by winning gold in 6:54.93.

World champion Jeannine Gmelin clinched victory in the women’s single sculls, with the Swiss justifying her status as the clear favourite to top the podium.

She won the race in a time of 7:31.15, while there was a fierce battle for the silver medal, which was eventually decided via a photo finish.

Austria’s Magdalena Lobnig would take the medal after being given a time of 7.32.62, while Ukraine’s Diana Dymchenko was forced to settle for bronze at 7:32.67.

The men’s single sculls crown was claimed by Kjetil Borch, as the pre race favourite triumphed in 6:49.95 after a well paced effort.

He was followed by Mindaugas Griskonis of Lithuania and Switzerland’s Roman Roeoseli, who ended in times of 6:50.68 and 6:52.06 to complete the podium.

Olympic silver medallists Paul and Gary O'Donovan of Ireland would end as the runners-up at two seconds down.

The podium was completed by Italy, with their crew clocking 6:23.32 at the finish.

Marieke Keijser and Ilse Paulis of The Netherlands prevailed in the women’s event, with the duo winning in 6:57.35.

They were over one second clear of their nearest challengers Poland and Switzerland, who rounded off the podium positions.

The fast finishing Alena Furman of Belarus was crowned women’s lightweight single sculls champion, after she finished in a time of 7:41.60.

France’s Laura Tarantola won silver in 7:45.94, while Italy’s Clara Guerra eventually settled for the bronze, having faded into third in 7:47.71.

The final rowing event of the Championships saw world champions Germany ease to the successful defence of their men’s eight continental title.

They enjoyed clear water on their rivals as the German crew won the event in 5:27.48, with The Netherlands claiming silver in 5:29.51.

Romania achieved a time of 5:29.71, which saw them settle for the bronze after a close battle with the Dutch.

Germany will now set their sights on defending their global crown at next month’s World Championships in Bulgaria.

A total of 11 nations won gold medals in the regatta in Glasgow, with Romania emerging as the most successful having earned three golds.