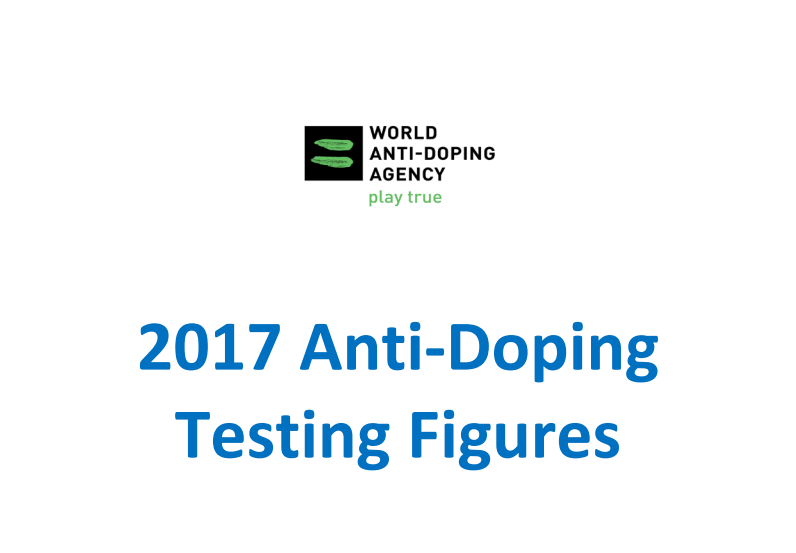 The World Anti-Doping Agency (WADA) have reported an increase in the overall number of samples analysed and an increase in blood samples in their testing figures report for 2017.

The report states there was an increase of 7.1 per cent in the overall number of samples analysed compared with 2016.

The vast majority of samples came from Olympic sports, which consisted of 205,405 of the total number.

This is due to all results being subject to a results management process conducted by anti-doping organisations, which includes matching results with Therapeutic Use Exemptions and longitudinal studies which can result in no case to answer or no sanction.

An ATF is a report from a WADA accredited or approved laboratory which requires further investigation, prior to any possible AAF being confirmed.

A single result may also not necessarily correspond to one athlete, with results potentially coming to multiple findings regarding the same athlete or measurements performed on the same athlete.

In addition to the samples analysed in Olympic Sports, there were 39,827 assessed in non-Olympic sports.

This includes sports under the banners of the Association of IOC Recognised International Sports Federations, Alliance of Independent Recognised Members of Sport, the International Paralympic Committee, Sports for Athletes with an Impairment or other sports.

A total of 1,174 AAFs were recorded from these samples, along with 27 ATFs.

The remaining 78,818 samples were not reported in the Anti-Doping Administration and Management System (ADAMS), which includes professional leagues in North America.

The WADA report does not illustrate statistics on ADRVs, which are will be reported separately in 2019.

The 2019 report will show analytical and non-analytical cases and the outcomes of results management.

“In addition to the 2016 ADRV Report published in April, this data will help organisations reflect on their anti-doping programmes.

“The report is part of an overall suite of resources and activities that includes educational initiatives, intelligence and investigations, and information sharing between Anti-Doping Organisations that helps to protect the integrity of sport and protect clean athletes.

“Taken over time, the statistics found in the report enable the anti-doping community to identify areas of improvement so that any potential weaknesses can be strengthened as necessary.”

The WADA testing figures report shows a decrease in the proportion of AAFs from 1.6 per cent of samples analysed in 2016 to 1.43 in 2017.

The decrease is largely due to a reduction in the reported cases involving the heart attack drug meldonium.

There were 515 cases involving meldoium in 2016, which was included on the WADA prohibited list for the first time in that year.

While the number of international federations that included ABP blood testing remained at 26 from 2016, the number of NADOs increased from 46 in 2016 to 54 in 2017.

WADA state the report shows the third set of global testing results since the revised World Anti-Doping Code came into effect in January 2015.

The full report can be accessed here.