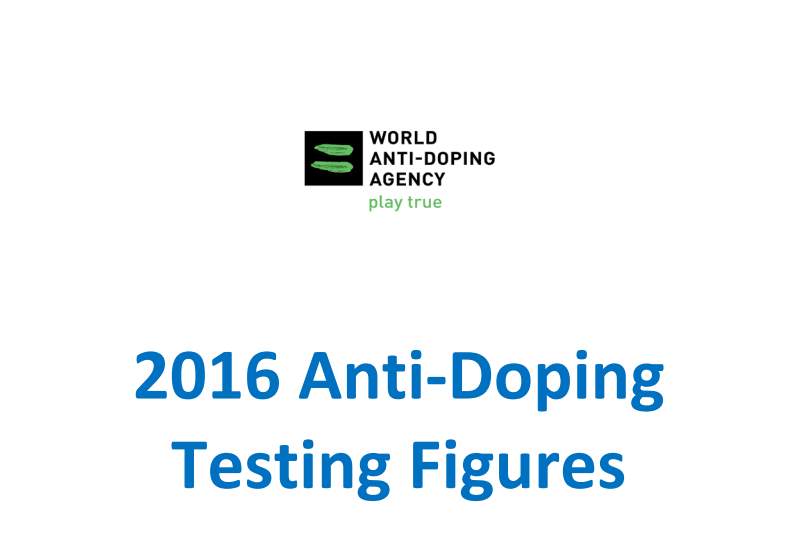 An increase in the number of adverse analytical findings (AAFs) has been reported by the World Anti-Doping Agency (WADA) in their Testing Figures Report for 2016.

The number of AAFs may not correspond with the number of Anti-Doping Rule Violation (ADRVs), as it could include matching results with Therapeutic Use Exemptions and longitudinal studies which can result in no case to answer or no sanction.

Additionally, one single result may not correspond to one athlete, with multiple findings from athletes possible.

The report summarises the results of all the samples WADA-accredited laboratories analysed and reported in WADA's Anti-Doping Administration and Management System (ADAMS).

WADA's 2016 Testing Figures Report is the second set of global testing data since the 2015 World Anti-Doping Code came into effect at the start of 2016.

"Paired with other facets of the global anti-doping programme, such as educational initiatives, intelligence and investigations, and information sharing between anti-doping organisations, the 2016 Report is another tool to protect the integrity of sport and promote the values of fair play, honesty and transparency."

From the 4,822 AAFs recorded in 2016, a total of 1,804 substances which were detected were anabolic agents, representing 43 per cent of the overall figure.

Clenbuterol and stanozolol were the most prominently detected anabolic agents, with 349 and 294 occurrences.

There were 721 hormone and metabolic modulators found, with the vast majority coming from meldonium.

The heart attack drug, which was added to the WADA banned list at the start of 2016, was responsible for 515 of those 721 AAFs.

Around 60 per cent of WADA-accredited laboratories saw an increase in the total number of samples.

There was also an increase in the overall number of non-athlete biological passport blood samples analysed.

"We believe that this report, which contains a vast amount of valuable information, enables the anti-doping community to ask the right questions where there may be trends, gaps and/or discrepancies; and, to follow up as necessary."

The report does not detail statistics on ADRVs, with these results set to be included in a separate report next year.

This is set to show the analytical and non-analytical cases and the outcomes of results management.