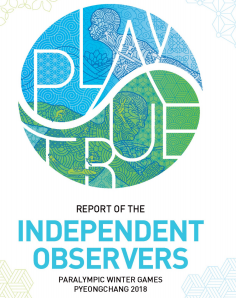 It has been revealed that seven outstanding doping cases are still being processed from the Winter Paralympic Games in Pyeongchang earlier this year.

The figure was revealed in a World Anti-Doping Agency (WADA) Independent Observers (IO) report analysing drug-testing procedures at the Games in March.

So far, none of the name of athletes or sports where cases have emerged have been published.

An annex in the report, however, reveals that there are seven athletes about which cases are either ongoing are at a stage of initial review.

Two cases involve narcotic methadone, which is banned in competition, although one of these emerged in a "non-analytical" way rather than through a failed test.

Other cases include ones for furosemide and chlorothiazide, both listed in the WADA Prohibited List as banned diuretics and masking agents.

Another has emerged through IRMS (Isotope Ration Mass Spectrometric) testing.

It is possible that some of these cases could ultimately result in no sanctions.

The WADA team chaired by Pirjo Ruutu, secretary general at the Finnish Antidoping Agency, praised the overall success of the anti-doping programme at the Paralympics.

"Just like any major sporting event, a number of obstacles and opportunities were faced by the organisers of Pyeongchang 2018 when it came to doping control," the report said.

"The IO team did note a number of issues during the Games, which are highlighted in the report.

"But overall, athletes can be very satisfied with the high-quality anti-doping programme put in place for Pyeongchang 2018.

"The IO team was well received by the IPC (International Paralympic Committee) and POCOG (Pyeongchang 2018) and was afforded every assistance on the ground.

"The IPC should be commended for its strong commitment to clean sport and for the high standards of its anti-doping policies and procedures when dealing with athletes with impairments."

A total of 842 samples were collected throughout the Games period from the 569 participating athletes.

The out-of-competition programme involved every sport except for wheelchair curling.

"Athlete notification is a challenging task and in many cases chaperones lacked experience that sufficient practical training would have addressed," the report said.

"Notification improved during the Games as chaperones learned from practice.

"The DCOs were usually quite professional, although some lacked suitable language skills.

"Furthermore, greater emphasis could have been placed on informing the less experienced athletes of the sample collection process."

Other elements were singled out for praise, including the use of a mobile Doping Control Station (DCS) that was used for both in and out-of-competition testing when needed.

Russian athletes participated only as Neutral Paralympic Athletes due to the country still being suspended by the IPC for the doping programme in operation at the previous winter edition of the Games in Sochi.

"I would like to thank the IO team for their report and recommendations, as well as the Pyeongchang 2018 Organising Committee and volunteers for their support in implementing the anti-doping programme during March’s Games," Peter Van de Vliet, the IPC’s Medical and Scientific Director, said in response to the report.

"As with all reports of this nature, the IPC Anti-Doping Committee will now review the report in full, noting the recommendations that will be implemented where necessary going forward."

“It is standard protocol for the IPC not to disclose any information regarding open investigations, and this includes expected timelines," an IPC spokesperson told insidethegames.

"Information regarding investigations is only communicated once they are fully resolved and closed.”