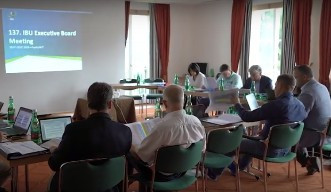 An external audit of the financial affairs of the International Biathlon Union (IBU) has found no suspicious activity, it has been claimed.

External auditing company KPMG presented their review of the IBU financial accounts for the past fiscal year, ending April 30 this year, to the world governing body's Executive Board meeting in Fuschl am See in Austria.

The IBU has been in crisis since its headquarters in Salzburg were raided in April following a tip-off from the World Anti-Doping Agency into possible doping, fraud and corruption involving Russian athletes.

Former President Anders Besseberg and former secretary general Nicole Resch are suspected of accepting bribes amounting to $300,000 (£211,000/€243,000) and other benefits in return for a favourable stance towards Russia.

The two have both denied the accusations but have stepped down.

"They [KPMG) reported no irregularities in the Federation’s books and a positive result," the IBU said following the Executive Board meeting.

An audit of the IBU's anti-doping programme is set to be presented at its Congress in Poreč in September, it has also been officially confirmed.

The Institute of Anti-Doping Organisations began their audit last month and remain on course to present their findings to the sport's membership at the resort in Croatia, IBU acting secretary general Martin Kuchenmeister promised.

The International Olympic Committee have suspended all direct financial payments to the IBU in the wake of the scandal.

The Executive Board also reviewed the amended IBU Code of Ethics draft provided by its Legal Committee.

A timeline was agreed to guarantee that the enhanced Code of Ethics, including the revised structure of the IBU Ethics Commission, will be complete and ready for adoption by the Congress in Poreč on September 5 and 9.

This ethics review will be supplemented by the introduction of what, the IBU promised, will be a "robust" whistleblower policy and new regulations governing bid committee conduct.

The Executive Board also discussed the budget proposal for the next three-year cycle.

The budget includes a significant rise in terms of contributions to National Federations and organisers of major IBU events.

The proposed budget also includes a one-third increase in athletes’ total prize funds compared to the previous season, and for the first time comprises prize money for the overall winners of discipline World Cups in individual, sprint, pursuit and mass start events.

It also been recommended that Snow Sports Federation of Ireland become a full IBU member at the Congress.