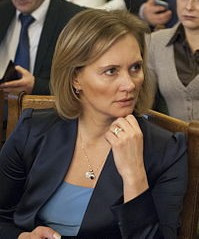 Former Latvian Minister of Justice Baiba Broka has been confirmed as a surprise challenger to Sweden's Olle Dahlin for the Presidency of the International Biathlon Union (IBU).

Norway's Tore Bøygard was also expected to stand but is now in the running for one of the two IBU first vice-president positions after the world governing body published the list of candidates today.

Frenchman Michel Vion was also mooted as a potential candidate but has ultimately decided not to run for the top job at the embattled organisation.

Broka and Dahlin, a current IBU vice-president for development and who was the first to signal his intention to stand for President, are standing to replace Norwegian Anders Besseberg at the helm of the IBU.

Besseberg, who held the position for 25 years, stepped down after he was implicated in a criminal investigation which centres on possible doping, fraud and corruption.

insidethegames understands Dahlin is considered the favourite at this stage and Broka's candidacy took even some IBU Executive Board members by surprise.

The 42-year-old Latvian politician is the current head of her country's Biathlon Federation.

She left her role as Minister of Justice in controversial circumstances four years after being denied national security clearance by the Constitution Protection Bureau.

It was reported at the time that she was not given the clearance for "very serious" reasons, which have not been disclosed.

Broka, head of the Latvian Biathlon Federation since 2016, had not previously disclosed her intention to stand for President.

She is also one of 17 candidates for six available seats on the IBU's ruling Executive Board.

Bøygard seems to have shelved his bid to lead the IBU in favour of running for the role of first vice-president.

Maygurov was nominated by the Belarus federation as Russia cannot propose candidates or motions after the IBU relegated the country to provisional membership in light of the doping scandal.

Kalle Lahdesmaki of Finland is taking on incumbent Klaus Leitner of Austria for the first vice-president finance position.

The IBU Congress is scheduled to take place in the Croatian resort of Poreč from September 5 to 10.

The Presidential election is due to be held on September 7.