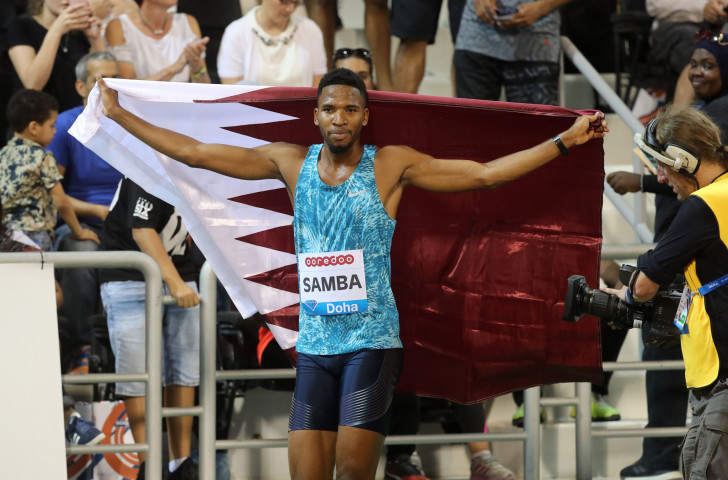 The 22-year-old Mauritanian, who now runs for the Middle East nation that will host next year's IAAF World Championships, said he would have to miss the Diamond League final for his event because he will be representing his adopted nation at the Asian Games in Jakarta.

The men's 400m hurdles final will take place on August 30 in the first of the two scheduled finals at Zurich and then Brussels, at which qualifiers from the previous 12 meetings will contest sudden-death competitions for the title of overall Diamond League champion and a winner's cheque for $50,000 (£38,000/€43,000).

The men's 400m hurdles heats at the Asian Games, which are being jointly hosted by the Indonesian capital of Jakarta and Palembang, capital of the South Sumatra province, will take place on August 26, with the final scheduled the following day.

"This may be the last day for me in the season," Abderrahman said as his pre-meeting press conference was winding up here today.

"I can't compete in the IAAF Diamond League final because I have Asian Games.

"I cannot compete any more in the Diamond League.

"This will be the last one for me this season."

Samba, who added that he was "excited" by the idea of winning the world title, and maybe also breaking the world record, at next year's IAAF World Championships in his adopted country, has won all five of his Diamond League races this season.

He became only the second man to break 47 seconds for the event at last week's race in Paris, where he clocked 46.98 seconds, just 0.20 off the world record set by Kevin Young of the United States in winning the 1992 Olympic title.

With Norway's world champion Karsten Warholm biting the bullet after four successive defeats, and desperate to make further inroads, and defending Diamond League champion Kyron McMaster of the British Virgin Isles - scarcely noticed as he followed Samba home in Paris in a personal best of 47.54 - also in the field, the Qatari could be signing off in a big way tomorrow evening, especially if the current warm weather holds.

Meanwhile, the 20-year-old American who is already aspiring towards the same goal as Samba in the 400m hurdles, Rai Benjamin, will be running in the final event of the programme at the annual Athletissima meeting and is seeking to improve on the breakthrough 200m personal best of 19.99 he achieved in Paris.

Benjamin, who equalled Ed Moses' second best-ever 400m hurdles time of 47.02 at last month's NCAA finals, followed home his University of Southern California training partner and contemporary Michael Norman, who won in the French capital in a personal best of 19.84, in what was a Diamond League debut for both and a first professional outing as far as he was concerned.

Benjamin, coming towards the end of a busy collegiate and international season, will not be meeting Samba until next season, but he is looking to hone his speed now in preparation for what could be an epic match-up next term.

Both have the ideal opportunity to achieve their aims given the presence in the field of the man who heads this year's world listings at 100m and 200m, with 9.88 and 19.69 respectively - the also hugely talented 20-year-old American Noah Lyles.

Lyles - who won the IAAF Diamond League 200m title last year and has yet to be beaten in the competition, is an athlete of dizzying potential, with a special ability to remain relaxed in stressful situations.

What might he do, pushed by his two hotshot US contemporaries?

There could be fireworks too in the 110m hurdles, where Authorised Neutral Athlete Sergey Shubenkov - world champion in 2015 and silver medallist last year - is in the form of his life.

Having sauntered to a 13.05 clocking in the heats at the Paris Diamond League, Shubenkov, who is studying to be a lawyer, made out a lengthy case for himself after being disqualified for a false start in the final before ultimately accepting the decision with customary good grace.

Two days later a field at the Gyulai Memorial in Székesfehérvár, Hungary, which included Jamaica’s world and Olympic champion Omar McLeod paid the price for the Russian’s frustration as he won in a personal best of 12.92, moving up to an all-time place of eighth which he now shares with former US greats Roger Kingdom and Allen Johnson.

World and Olympic 800m champion Caster Semenya, who led from gun to tape in Paris to lower her African and Diamond League record to 1min 54.25sec, will compete over 1,500m against a field that includes seven athletes with personal bests of under four minutes - a distinction the South African will surely be seeking for herself.

But victory is far from certain for this serial winner over 800m given the presence of athletes such as Sifan Hassan of the The Netherlands, who has a best of 3:56.05, Ethiopia’s Dawit Seyaum, who has run 3:58.09, and Britain’s world indoor silver medallist Laura Muir, who has run 3:55.22.

World champion Muktar Edris - he of the mocking "Mobot" in defeating Britain’s Mo Farah in London last year – will be the senior partner, but his personal best of 12:54.83 has been bettered by his 20-year-old compatriot Yomif Kejelcha, who has run 12:53.98.

The 18-year-old whom Kejelcha beat to the world indoor title in March, Selemon Barega, is also likely to be a significant player, having already run 12:55.58 and having won the last Diamond League 5,000m in Stockholm in 13:04.05.