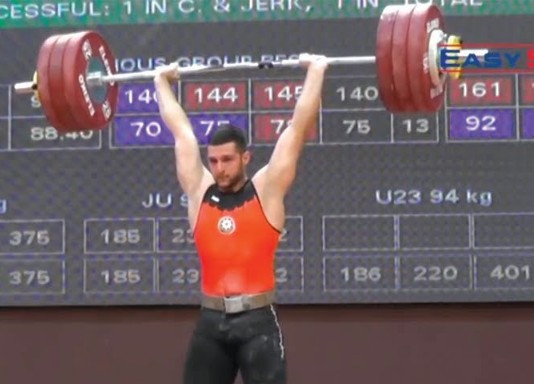 Another teenaged weightlifter from Azerbaijan has tested positive for anabolic steroids, putting his nation's place at the 2020 Olympic Games in Tokyo in doubt.

Ukraine, which has had two young lifters suspended, is also in line for a ban that could keep its weightlifters out of Tokyo 2020.

Both nations are among the nine who were suspended for a year by the International Weightlifting Federation (IWF) last October – but it appears that they had teenagers competing while doped at the European Junior Championships in the very week when their one-year bans started.

Four athletes from those Championships in Durres in Albania have been disqualified; two are from Ukraine, one from Azerbaijan and the fourth is Nikjolay Panayotidi from Russia, another of the suspended nations.

Only two weeks ago Azerbaijan had a one-year suspension cut short by the IWF for making "significant progress" in its anti-doping efforts.

But the latest case takes Azerbaijan to three within eight months, and any nations with three positives in a calendar year are liable to a suspension that would keep them out of Tokyo 2020.

Ukraine has had two of its athletes suspended, and with one case outstanding against the double European champion Oleksandr Pielieshenko, it is also on course for three in a year.

The one-year bans, imposed by the IWF on all nations who had three or more positives in the retesting of samples from the 2008 and 2012 Olympic Games in Beijing and London respectively, began on October 20 last year.

Azerbaijan had five retrospective positives, four of whom have been suspended more than once, while Ukraine had three.

The European Junior and Under-23 Championships started five days before the bans kicked in, and athletes from suspended nations were allowed to compete until the end of the event.

Among them was Huseyn  İsmayilov, 19, a bronze medallist at 94 kilograms for Azerbaijan in Durres.

The IWF has announced that  İsmayilov has tested positive for testosterone, though there is no indication of where the test took place.

Azerbaijan has already had an 18-year-old lifter, Isa Rustamov, disqualified from the 69kg in Durres, where he finished sixth.

Rustamov has been banned for four years.

The third Azerbaijan lifter to have tested positive for steroids recently was Anastassiya Ibrahimli, a junior world champion in 2013 when she competed at 75kg for Kazakhstan.

The IWF has also announced new bans for two 20-year-old Ukrainians, both of whom have been disqualified from medal positions in Durres, where they competed as teenagers.

Igor Obukhov, the world and European youth champion in 2015, was third in the clean and jerk at 85kg in Durres; his compatriot Alona Shevkoplias was third on total in the women’s 75kg.

Those two cases follow the disclosure in April that Pielieshenko, 24, had tested positive again.

Under the three-in-a-year rule both, one all cases are closed Azerbaijan and Ukraine face the possibility of a two-year ban when the IWF’s Independent Sanctioning Panel discusses their cases.

The Panel must also consider the case of Egypt, which had seven young lifters test positive in December, 2016.

Under the new IWF anti-doping policy, which was not in force at the time of the Azerbaijan, Ukraine and Egypt positives, the ban would be up to four years.

Two weeks ago the IWF allowed Azerbaijan to return to youth competition from June 19, four months early, and junior and senior contests from August 19.

Turkey and Armenia were given more favourable treatment, and both those nations have lifters entered in the IWF Junior World Championships in Tashkent Uzbekistan starting on July 7.

An independent monitoring group found that Azerbaijan, Turkey and Armenia had all met a range of conditions relating to their anti-doping activities.