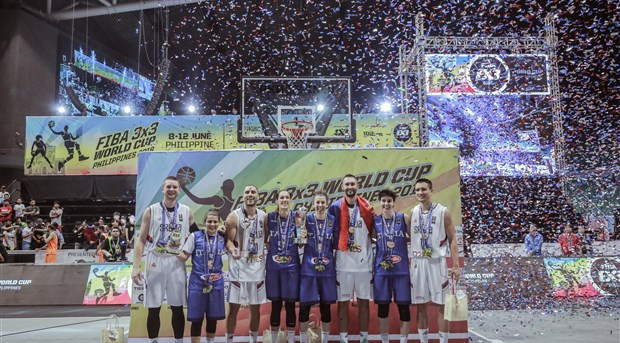 Serbia and Italy have each won gold in the in the men's and women's competitions respectively at the International Basketball Federation's 3x3 World Cup.

Serbia took the crown in the men's event at the the Philippine Arena in Bocaue to win their third title in succession and their fourth overall.

They beat The Netherlands in the final 16-13, which was a repeat of last year's gold medal match.

Italy finished victorious in the women's event after beating Russia 16-12.

The quarter-finals, semi-finals and finals all took place today, on day five of the competition in The Philippines.

In the men's event Serbia, who were the number one seeds, beat Mongolia comfortably 21-8 in the quarters, before seeing off Poland in a much closer semi-final, 21-19.

Italy's route to the final in the women's event was less straight forward, winning two close games against the United States and China.

Italy's victory in this year's competition saw them win their first 3x3 World Cup medal and they did it in style, winning all of their games.

Back in the men's competition, the third place play-off saw Poland face Slovenia.

The Poles started well but Slovenia proved too strong in the end, clinching the bronze 21-16.

The women's bronze medal match saw France take an early lead against China, which they managed to maintain until the end, eventually winning 21-14.

The World Cup's most valuable player awards went to Serbia's Dusan Bulut in the men's event and Italy's Rae Lin D'Alie in the women's.

3x3 basketball will make its Olympic debut at Tokyo 2020.