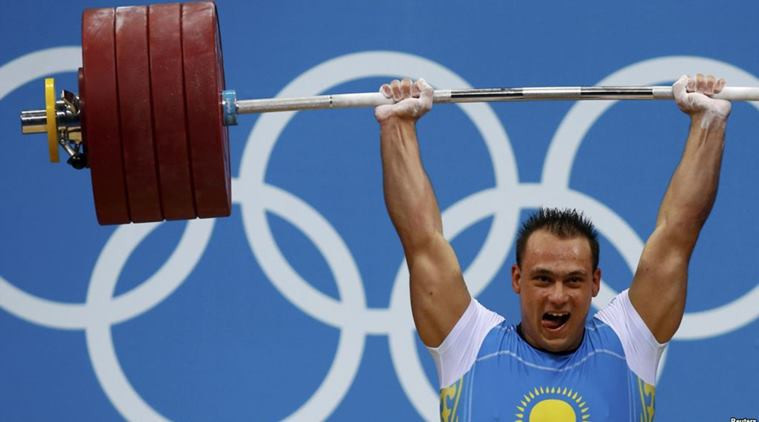 On the day after his two-year suspension ended Ilya Ilyin, the weightlifter who forfeited two Olympic gold medals because of doping, has publicly declared his intent to compete at Tokyo 2020.

On the same day the Kazakhstan Weightlifting Federation (WFRK) explained its decision to challenge the qualifying system for Tokyo 2020, which limits the number of entries from nations with a bad doping record over the past 10 years.

Kazakhstan has the worst record in the world since Beijing 2008 but the WFRK secretary general, Aldiyar Nuralinov, said his nation had "already been fully punished" and that Kazakh lifters and coaches had "learned the necessary lessons from the past".

Ilyin, who was 30 last month, has been training during his suspension and is preparing for Kazakhstan’s National Championships in September.

Ilyin won at Beijing 2008 and at London 2012 in the notorious 94kg weight class, but lost both gold medals when he came up positive in the International Olympic Committee’s (IOC) retesting of samples from those two Games.

There were 10 positives in the 94 kilograms, three from Beijing 2008 and seven from London 2012, where the ninth-placed athlete - a Pole who was banned for a doping violation two years ago - ended up winning a medal.

Ilyin could have been banned for eight years had he been informed of those two positives, both for stanozolol, in chronological order.

But he was told of the London 2012 positive seven days before he learned of the Beijing 2008 result and that meant his two cases were treated as one, leading to the shorter suspension, which ended yesterday.

"What did I do in two years?" said Ilyin at a press conference in Astana, the Kazakh capital, today.

"I trained, I shared it on social networks.

"People around the world watch my exercises - I like it.

"I help young athletes from a distance."

Ilyin said he was aiming to compete at 100kg, a new weight class expected to be adopted when the IWF votes on an overhaul of its body weight categories in July.

"Kazakhstan's Championship is ahead, and I want to win it.

Ilyin, who still has half-a-million followers on social media, said he had studied in the United States, in Boston, and had improved his English during his suspension.

He has good relations with his nation’s President, Nursultan Nazarbayev. and influential businessman Zhanat Tusupbekov, the WFRK President and a vice-president of the IWF.

"I still need my country," he said.

"Thanks for the support."

The WFRK has supported its suspended athletes from Beijing 2008 and London 2012, and its current national teams, since the positives were announced two years ago.

Nuralinov said his Federation supported the promotion of clean sport and expected to maintain good relations with the IWF despite challenging the governing body’s new Olympic qualifying system - which has been approved by the IOC - at the Court of Arbitration for Sport on a date yet to be fixed.

Nations with 20 or more positives since 2008 can send only two athletes, one man and one woman, to Tokyo 2020.

Ilyin might struggle to gain that single place if Kazakhstan is unsuccessful with its challenge, as Nijat Rahimov, 24, won the Olympic gold medal Rio 2016 in the 77kg and there will be other younger contenders.

Kazakhstan has 30 sanctions listed by the IWF, with four IOC cases outstanding – more than Russia, Azerbaijan, Armenia and Belarus, the other nations with 20 or more cases.

"For violations of 2008 and 2012 we have already been fully punished, and this has affected the national team, and athletes in particular," said Nuralinov, who pointed out that besides incurring suspensions, Kazakhstan had paid substantial fines.

Under the new qualifying system, he said, "we are forced to re-punish in the form of a restriction on the number of athletes, which contradicts the interests of our country, where weightlifting is one of the biggest sports.

"Moreover, these rules infringe the interests of ‘clean’ athletes.

"Our athletes turned to us.

"They have all the chances to participate in the Olympic Games in 2020 in Tokyo, but due to the reduction in the number of quotas, and in fact due to other people's mistakes, they cannot get there.

"We considered it our duty to uphold the positions of Kazakhstan's weightlifting and decided to appeal to CAS in Lausanne."

The WFRK had made substantial changes to their team in recent years because of past problems with doping, Nuralinov said.

The changes were led by Tusupbekov after his election as WFRK President.

"The new team faced a huge challenge, connected with the difficult legacy of the past," said Nuralinov.

"The fight against doping was placed at the forefront, and systematic work is being carried out."

A disciplinary commission was established, coaches who were deemed negligent "received severe punishments", and a series of seminars for athletes and coaches have been held.

There was still work to be done, said Nuralinov, but, "gradually we are moving towards the eradication of this problem.

"The team is under the constant supervision of international doping officers, who have visited Kazakhstan from the beginning of the year to collect analyses.

"In general, at the level of the national team, both trainers and athletes have learned the necessary lessons from the past.

"Suffice it to say that since 2016 at the international level Kazakhstan has no violations."