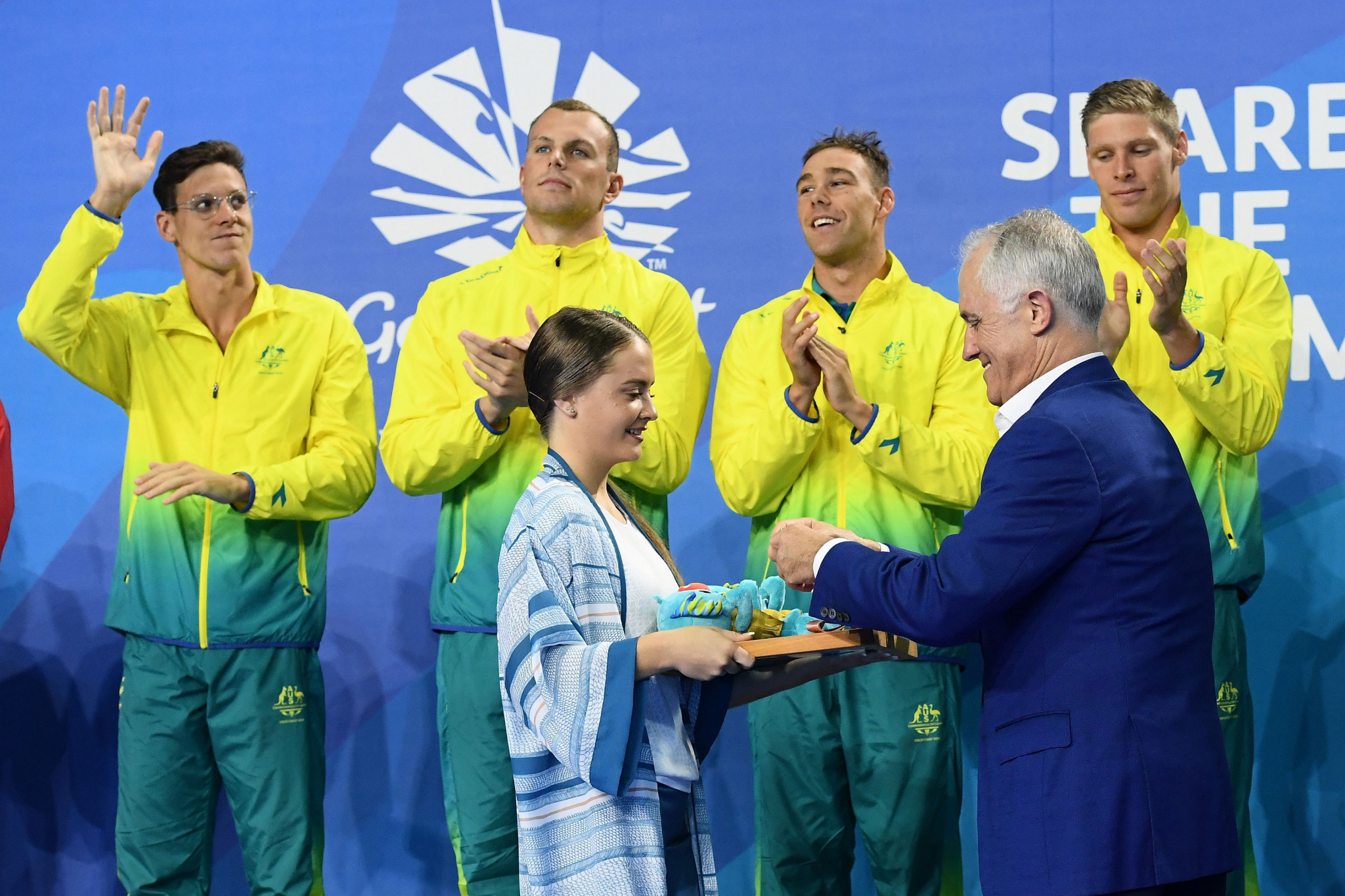 Australian Mitch Larkin sealed his fifth gold medal of the Commonwealth Games here in a dramatic 4x100 metres medley relay as the gamble to select Bronte Campbell ahead of sister Cate in the women's equivalent paid off on a pulsating final night of swimming at Gold Coast 2018.

England were on the brink of a stunning upset in the men's race here as they led going into the anchor freestyle leg but Olympic champion Kyle Chalmers caught and passed Ben Proud to secure the title in thrilling fashion.

Chalmers touched the wall in front of Proud as Australia, whose team included Larkin, Jake Packard and Grant Irvine, clocked a Games record time of 3min 31.04sec, finishing just nine hundredths ahead of the English quartet.

England, comprised of Luke Greenbank, Adam Peaty, whose breathtaking breaststroke leg thrust his team firmly into contention, James Guy and Proud, had their hearts broken as they were forced to settle for silver.

The women's race followed a similar pattern as Canada held the advantage heading into the fourth and final leg.

Taylor Ruck, the 17-year-old star tipped for a success-laden career, was tasked with bringing it home for her country but Bronte Campbell had other ideas.

She timed her late surge for the wall to perfection, overtaking Ruck in the dying embers to clinch gold in a Games record of 3:54.36.

The relay victory saw Seebohm earn further redemption following her disappointing third place in her preferred 200m backstroke earlier on at the event.

Seebohm had been hit with a backlash after blaming the media for her bronze medal in the event but silenced her critics with two gold medals on the final night.

Before the relay, the 25-year-old had already triumphed in the women's 50m backstroke, ousting Masse with a time of 27.78 as Davies earned bronze.

Larkin took to the water having already secured the 50m, 100m and 200m backstroke crowns.

The double Olympic medallist added a fourth gold at these Games by reigning supreme in the men's 200m individual medley in 1:57.67, a Games record.

Ariarne Titmus demonstrated exactly why she is considered the rising star in Australian swimming as the 17-year-old sensation sealed the 400m and 800m freestyle double.

Titmus cruised to the 800m crown here last night and was similarly dominant over 400m, moving further clear of the rest of the field with every passing lap before touching in a Games record of 4:00.93.

Her time would have been enough for silver at last year's World Championships and the 2016 Olympics in Rio de Janeiro and was the seventh fastest in history.

She was streets ahead of her rivals as Holly Hibbott of England was nearly five seconds behind in silver medal position.

Hibbott's team-mate Eleanor Faulkner was the recipient of bronze.

Underdog Jack McLoughlin shocked compatriot Mack Horton in the men's 1,500m, the longest distance on the programme, as he clocked a time of 14:47.09.

Daniel Jervis of Wales prevented the expected Australian one-two as he earned silver in 14:48.67.

Horton, the Olympic 400m champion, could do no better than bronze as he was unable to live with the speed and stamina of his team-mate.

Australia's Lakeisha Patterson was hotly-tipped to break the world record in the women's S8 50m freestyle but fell outside of the mark, taking gold in 30.14.

Patterson's time was slower than the 29.73 clocked by Maddison Elliott at the 2016 Paralympic Games in Rio de Janeiro.

Australia then won the final Para swimming race of the Gold Coast 2018 programme as Brenden Hall lead a podium sweep for the nation - their seventh in the sport at the Games - in the men's S9 100m backstroke.

The performance saw Australia round off the swimming programme in style with eight of the nine titles on offer tonight.

The hosts finished comfortably in top spot on the medals table, claiming 28 titles in a enormous haul of 73.

England were the next best nation with a total of 24, nine of which were gold.