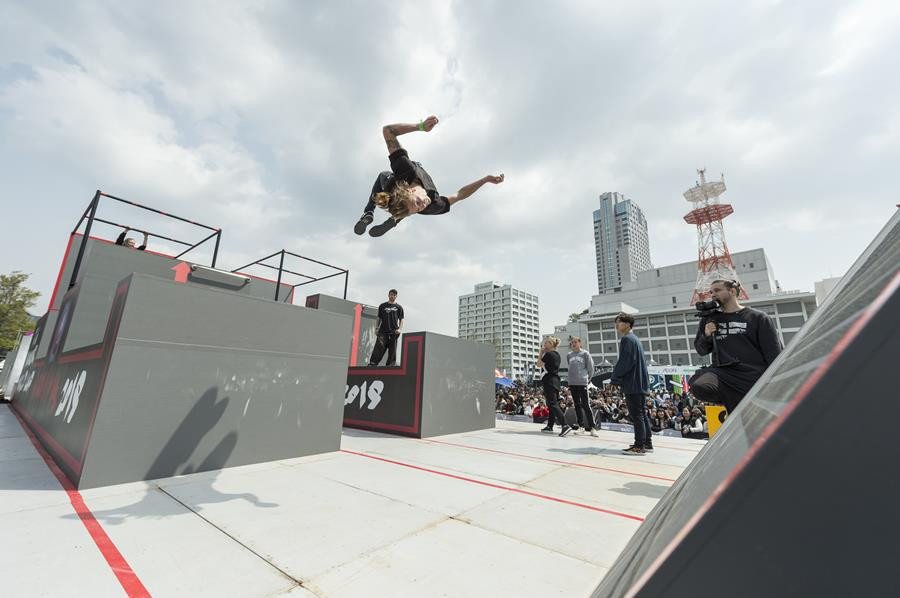 Spain’s Pedro Gomez was fastest in both qualifying and the final in the first ever International Gymnastics Federation (FIG) Parkour World Cup on the second day of the Festival of Extreme Sports (FISE) World Series in Hiroshima.

Heavy rain the previous day meant the action on day two at the former Municipal Baseball Stadium - a short walk from the Peace Memorial Park - was even more packed as extra qualifying events were carried over.

In the women's freestyle, Mexico’s Karla Gonzalez from Mexico managed to impress at her first international competition and surprise everyone by beating one of the most famous figures in the scene, Alexandra Shevshenko of Russia.

Skateboard street pro was the other sport with finals today.

With skaters allowed two runs of 50 seconds, there was plenty of opportunity for the riders to display a huge range of tricks and runs.

All the riders in the women’s skateboard street pro were Japanese, and Maeda Hina finished top to earn a landmark victory in the first FISE World Series stop to be held in her country.

Suzanna Kanemoto, however, earned huge accolades for the quality of her tricks.

Joseph Garbaccio of France, the overall event winner last year, was well placed until a second run that did not go to plan.

The day had begun with the semi-finals of the women’s International Cycling Union (UCI) BMX Freestyle Park World Cup, an event that has gained additional intensity since being added to the Olympic programme for Tokyo 2020.

Hannah Roberts, a 16-year-old from the United States and last year’s overall winner, took first place in the semi-final with 73.80 points ahead of Lara Lessman of Germany, who scored 70.00, and Roberts' compatriot Nikita Ducarroz, who totalled 68.60.

Due to the previous day’s qualification being rained off, the men’s event was particularly competitive with 90 riders seeking one of the 12 places for tomorrow’s final.

The two-run format of the competition proved useful for many of the athletes including Japanese athlete Rim Nakamura and last year’s champion Daniel Dhers of Venezuela, who both crashed on their first runs but thanks to their second runs still managed to qualify.

Britain’s Alex Coleborn finished top with 84.37 points, with Justin Dowell of the US second on 83.50 and Kenneth Tencio of Costa Rica third on 83.27.

The BMX flatland event has been particularly popular in Japan for the last 20 years.

So there was extreme attention being paid to the men’s semi-finals of the UCI BMX Flatland World Cup.

Matthias Dandois of France finished top with 92.33 points, with Jorge Gomez of Spain second on 91.00 and home rider Hiroya Morizaki third on 88.67.

After a stunning performance in Jeddah, the 2017 champion Julien Cudot of France stuttered in the World Skate Roller Freestyle semi-finals, qualifying last in 12th place.

Britain’s Joe Atkinson produced a superb run to finish first with 93.00 points, but will have his work cut out to hold off the challenge of local hero Takeshi Yasutoko, placed second with 91.00, two points clear of C J Wellsmore of Australia.

Of the 14 athletes competing in the Women’s International Federation of Sport Climbing (IFSC) bouldering Semi-Final, 12 were Japanese, and it was home hope Mei Kotake who topped the rankings ahead of France's Clementine Kaiser and Angle Payne of the US.