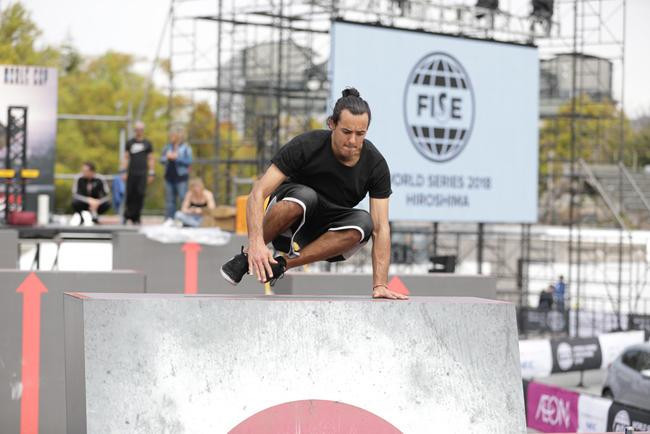 FISE has teamed up with several International Federations which means official World Cups can be held.

Parkour - derived from military obstacle course training and involving the unassisted negotiation of challenging man-made or natural terrains -  is being championed by FIG, which earlier this year signed a Memorandum of Understanding with the International Parkour Federation.

The FIG proclaimed that 2018 would be "a year of achievements for parkour" as the sport aims towards possible inclusion at the Paris 2024 Olympics.

But their recent signing up has been criticised by Parkour Earth, established after the FIG were accused of "encroachment and misappropriation" of the sport.

Parkour will be among six events taking place at Hiroshima's former Municipal Baseball Stadium - a short walk from the Peace Memorial Park.

The debut World Cup has attracted a field of 35 participants - 27 male and eight female -who will take part in qualifications in speed-run and freestyle before the final.

They will take part on a 40 metre course pitted with obstacles.

In speed-run, they must overcome this series of obstacles in first one direction and then the other, at the maximum speed possible.

The eight fastest will meet in a final round comprising of a series of direct duels.

In freestyle, where technical performance is judged, they can make use of walls and bars to exhibit their style and display their creativity.

Home athlete Moto Sasaki will be looking to make an impact in the BMX flatland competition.

BMX freestyle is due to make its Olympic debut at Tokyo 2020, as is skateboard park.

Britain's 21-year-old George Poole, who made his first appearance at the FISE World Series in 2014, has developed a series of impressive tricks in the skateboard event and looks ready to step up into serious podium territory.

The skateboard street pro event has qualifying tomorrow before semi-finals and final on Saturday.

Following the Jeddah launch event, Hiroshima will be the first of five hosting countries across three continents.

After Japan, the Tour is due  visit Montpellier in France, from May 9 to 13, Edmonton in Canada from July 13 to 15, Budapest in Hungary from September 6 to 9, and Chengdu in China from November 2 to 4.