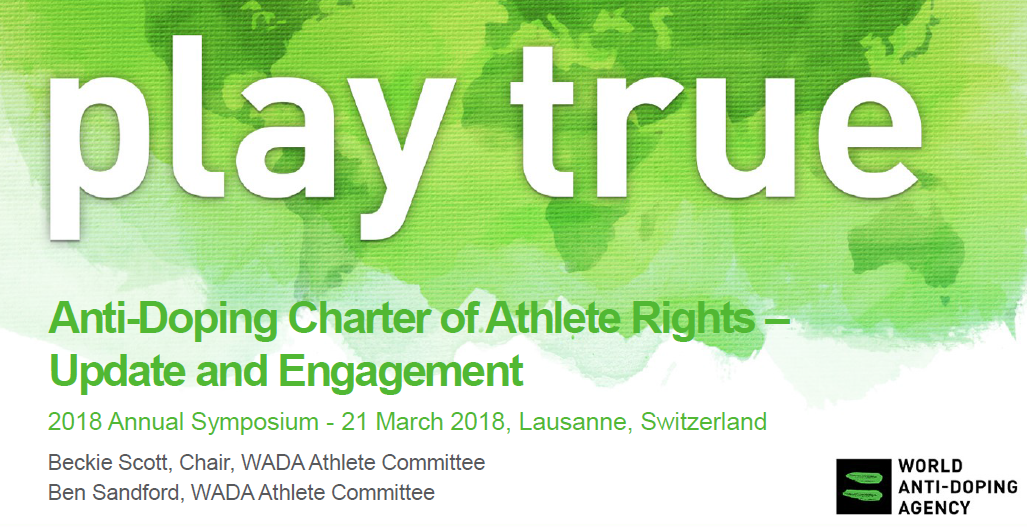 A draft Charter of Athletes' Rights has been proposed by the World Anti-Doping Agency (WADA) to provide more protection on areas including the right to fair justice, equal testing and freedom of expression.

The Charter currently consists of 16 articles and could be fully implemented into the revised World Anti-Doping Code due to come into operation in 2021.

This would mean that all sporting bodies who sign-up to the Code would have to comply with its proposals.

It has been hailed as a "game changer" by WADA Athlete Committee chair Beckie Scott.

The 16 Articles concern: "Clean and Fair Sport", "Equality of Opportunity", "Equitable and Fair Testing Programmes", "Protection of Health", "Corruption-Free Sport", "Right to Justice", "Right to Accountability", "Right to Representation", "Access to Information", "Freedom of Expression", "Whistleblowers and Substantial Assistance", "Right to Education", "Right to Participate", "Right to Data Protection", "Mutual Respect of Rights" and the "Right to an Effective Remedy".

Many of these topics are already being protected anyway, but having a formal document codifying them will, Scott hopes, make this easier to enforce.

The former cross-country skier claimed the Charter will be both "aspirational and enforceable" and will "have some teeth" if it is embedded in the WADA Code.

The floor is now given to the athletes as @BeckieScott4 and @bensandford12 present an update on the Anti-Doping Charter of Athlete Rights. pic.twitter.com/hbjTg3oTII

"I think the Russian doping scandal exposed a lot more than doping in Russia," Scott said here during the WADA Symposium.

"It exposed fractures and conflicting loyalties in the whole system.

"Athletes have realised the status quo is not good enough any more.

"This is a way for athletes to hold value and be part of the conversation and not be sidelined from decisions which affect them the most."

Noteworthy elements proposed so far include an insistence on equal testing to avoid the current discrepancy of those in some countries existing in far more vigorous anti-doping regimes than others.

The right to justice and accountability comes amid concerns about the inconsistency and ad-hoc nature of current procedures.

A WADA-appointed independent athletes ombudsman has been proposed to provide extra assistance.

The section on freedom of expression seeks to allow athletes to act without fear of retribution, such as being left off a team, if they speak out about anti-doping matters.

There is now expected to be more discussions at events such as the Global Athlete Forum in Calgary in June 3 and 4 before "broad stakeholder" consultation as part of the World Anti-Doping Code Review.

The Charter could then be implemented into the revised Code in November 2019.

FairSport, an independent foundation dedicated to eradicating cheating in sport and headed by Norway's four-time Olympic speed skating champion Johann Koss, have been involved in developing the WADA Athletes' Charter.

The company, whose executive director is former International Olympic Committee (IOC) Athletes' Commission chair Claudia Bokel, are in the process of developing a broader Charter encompassing other areas beyond anti-doping.

It is not completely clear how the document will co-exist alongside another Charter being devised by the IOC Athletes' Commission.

New Zealand's BMX cyclist Sarah Walker was confirmed as chair of a Steering Committee designed to set up this document last year.