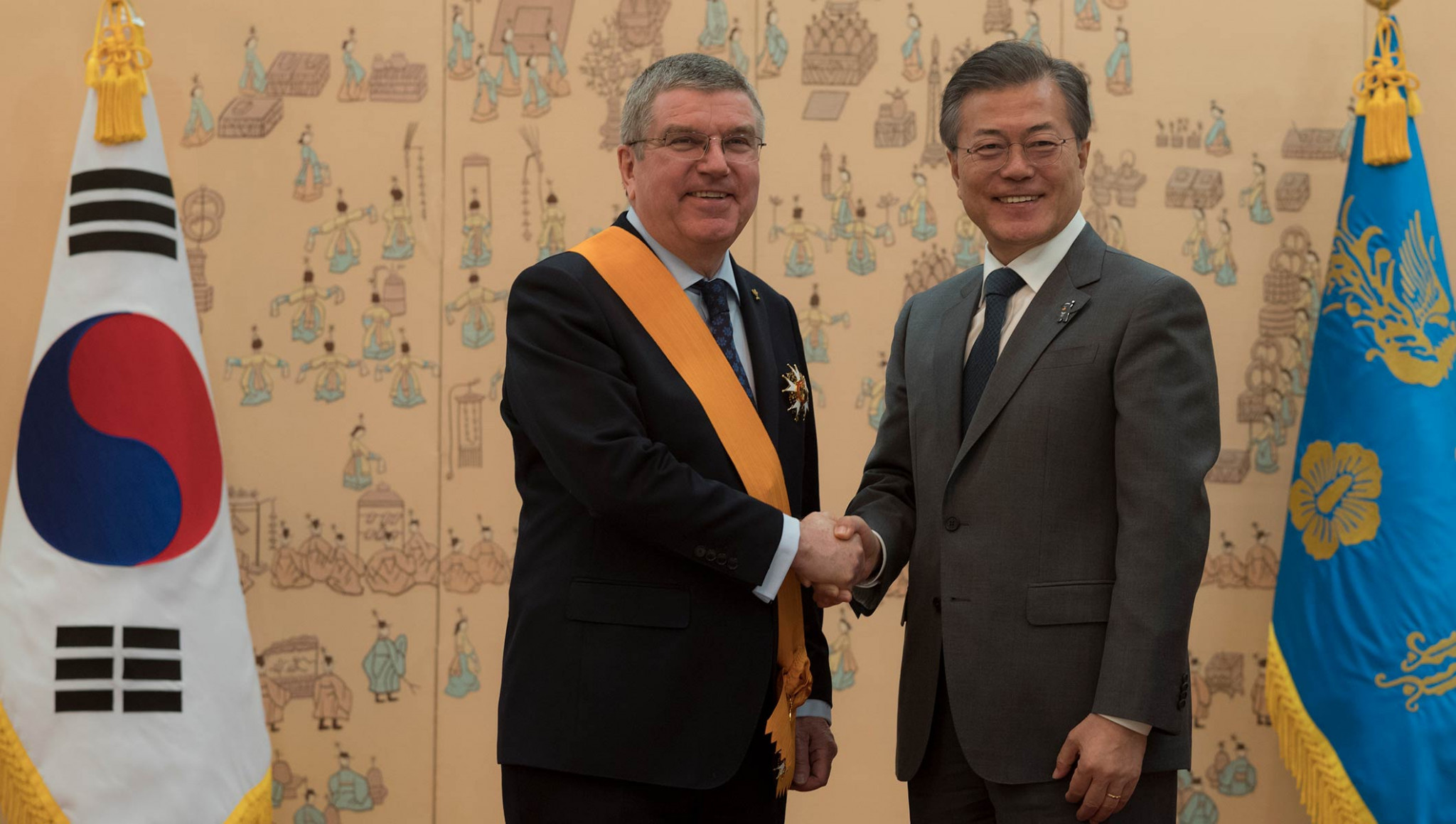 Bach was given the Cheongryong Medal, South Korea’s highest sporting honour, by President Moon Jae-in in a ceremony at the Blue House in Seoul.

North and South Korea, still technically at war, marched together under the unification flag at the Opening Ceremony of Pyeongchang 2018 and, for the first time in Olympic history, competed together as part of a unified Korean women's ice hockey team.

Bach claimed during last month’s IOC Session that Pyeongchang 2018 has "brought real hope" to everybody in the Korean Peninsula by encouraging better relations between North and South.

Earlier this week, the Blue House said North Korea is willing to talk about getting rid of its nuclear weapons if its own safety can be guaranteed.

The subject was raised when South Korean officials met with North Korea’s leader Kim Jong-un during a rare visit to Pyongyang.

Kim also expressed his openness to talks with the United States, whose President Donald Trump today accepted to meet Kim by May.

The two Koreas later agreed for Kim and Moon to meet next month at a summit in the truce village of Panmunjom.

It will be the first meeting of its kind for more than a decade and the first since Kim took power in North Korea.

According to Blue House spokesman Kim Eui-kyeom, Moon told Bach at the ceremony: "North Korea came to take part in the Pyeongchang Olympics thanks to the IOC's active efforts and support.

"That allowed the South and the North to send special envoys to each other while enabling possible dialogue between the United States and North Korea.

Bach has also been awarded an honorary citizenship by Seoul City for his role in forming the unified Korean women's ice hockey team.

The honorary citizenship was awarded by Seoul Mayor Park Won-soon at City Hall.

"I sincerely thank IOC President Thomas Bach for his deep interest in peace on the peninsula and for his devotion to make us feel that we were all united during the Pyeongchang Olympics," Park was reported as saying by The Korea Herald.

It was announced yesterday that the National Paralympic Committees (NPCs) North and South Korea will march separately at today's Opening Ceremony of the Pyeongchang 2018 Winter Paralympic Games, where Bach will be among those in attendance.

The International Paralympic Committee (IPC) had offered both countries the chance to march together under the same conditions as last month’s Winter Olympics Opening Ceremony.

But despite what the IPC describes as a "day of amicable and positive discussions between the two NPCs in the Paralympic Village", the two parties have decided against it.