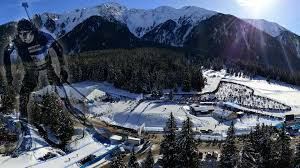 Kazakhstan's biathlon team doctor Khossilbek Tagayev has been provisionally suspended on suspicion of committing an anti-doping rule violation after Italian police found banned substance prednisolone in his hotel room during a raid in January.

In a statement, the International Biathlon Union (IBU) confirmed Italian police uncovered enough of the steroid medication for Tagayev to use it for prohibited measures, such as "intravenous infusions with more than 50 ml".

The worldwide governing body also said Italian authorities found "packages and vials" of the substance, which is prohibited in-competition according to World Anti-Doping Agency (WADA) regulations.

"During the executed search warrant the Italian police found, among other seized medication packages and vials in Dr. Tagayev's room, prednisolone, which is a specified substance prohibited in competition," the IBU statement read.

"The police report states that the seized substances could have been used for prohibited methods, such as intravenous infusions with more than 50 ml."

Tagayev will now face a hearing in front of the IBU Anti-Doping Hearing Panel, who will decide whether or not a violation has been committed.

He has been prevented from attending any IBU event or competition, although he is not part of the Kazakhstan delegation due to attend the IBU World Cup in Kontiolahti in Finland, which begins tomorrow.

"The National Biathlon Federation of Kazakhstan is required to impose the provisional suspension of Dr. Khossilbek Tagayev as from the receipt of this notification," the IBU statement added.

The raid was conducted on January 20, when the Kazakhstan team were competing at an IBU World Cup event in Antholz in South Tyrol.

There were also handwritten notes that pointed to doping.

The boxes had various accreditations for IBU events and were transferred to the Anti-Doping Agency of Austria.