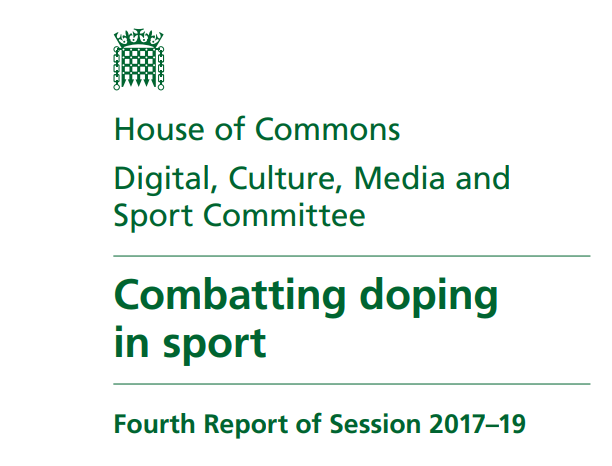 A British Parliamentary report into doping in sport has heavily criticised International Association of Athletics Federations (IAAF) President Sebastian Coe after he warned that reports of widespread drug use was a "declaration of war" on his sport.

In a 52-page report published today, the Department for Digital, Culture, Media and Sport (DCMS) Select Committee criticise the conduct of both British Cycling and Team Sky and the way in which they have responded into investigations surrounding the incident.

A lack of IAAF "transparency" is highlighted and Coe is particularly criticised for a "very ill-judged" reaction to media reports in 2015 shortly before he was elected President of the world governing body highlighting doping in athletics.

It also wants "greater powers and resources" given to drug-testing bodies such as UK Anti-Doping (UKAD) to conduct investigations and enforce the rules.

It is proposed that sports, particularly "wealthier" ones, consider contributing "a fixed percentage of their income - from sponsorship or overall" to UKAD so as to do this.

The report is undertaken by the DCMS Culture, Media and Sport Committee chaired by Member of Parliament Damian Collins and is based on over two years of hearings.

The section of the report on athletics and the IAAF focuses on the period when Coe was vice-president to his predecessor, as President, Lamine Diack.

Diack is still currently in Paris facing charges including the involvement in a cabal of IAAF officials who allegedly accepted bribes from athletes, including Russian marathon runner Liliya Shobukhova. in return for covering up failed drugs tests.

The world governing body are heavily criticised for failing to share or allow the publication of reports into wrongdoing.

Coe, who replaced Diack as President in August 2015, is singled out for his "declaration of war" comment shortly before his election following The Sunday Times publishing data from 5,000 athletes which, it claimed, revealed an "extraordinary extent of cheating".

"It raises questions about the IAAF’s commitment fully to investigate difficult issues when they arise," says the report.

"The emerging picture is of a prevalence of doping in athletics which was greater than was officially recognised when this inquiry began.

"The work of whistleblowers and investigative journalists has helped to bring this to the fore.

"Rather than their work being tantamount to a 'declaration of war' on sport, a very ill-judged statement, it should be seen as a warning light that was acted upon too late.

"We want Lord Coe to succeed in his difficult task of eliminating doping in athletics.

"To achieve this, he and the IAAF must encourage, not criticise, efforts by others to help."

Russian cyber espionage group Fancy Bears' revealed in 2016 that five-time Olympic champion Sir Bradley received therepeutic use exemptions (TUEs) to take corticosteroid triamcinolone before the Tour de France in 2011 and 2012 and the Giro d'Italia in 2013, his biggest races in all three seasons.

"From the evidence that has been received by the Committee regarding the use of triamcinolone at Team Sky during the period under investigation, and particularly in 2012, we believe that this powerful corticosteroid was being used to prepare Bradley
Wiggins, and possibly other riders supporting him, for the Tour de France," the report concludes.

"The purpose of this was not to treat medical need, but to improve his power to weight ratio ahead of the race.

"The application for the TUE for the triamcinolone for Bradley Wiggins, ahead of the 2012 Tour de France, also meant that he benefited from the performance enhancing properties of this drug during the race.

"This does not constitute a violation of the WADA (World Anti-Doping Agency) code, but it does cross the ethical line that [team principal] David Brailsford says he himself drew for Team Sky.

"In this case, and contrary to the testimony of David Brailsford in front of the Committee, we believe that drugs were being used by Team Sky, within the WADA rules, to enhance the performance of riders, and not just to treat medical need."

Sir Bradley claimed he requested permission to take the product to treat a long-term asthma issue and to "restore a level playing-field".

The report recommended that WADA introduce a "complete ban" on the use of corticosteroids and the painkiller tramadol, as well as the consideration of greater reforms to the TUE system.

It also dwells on a package ordered by former team doctor Richard Freeman and delivered to Sir Bradley during the 2011 Criterium du Dauphine.

It is claimed that the package contained fluimucil, a decongestant that is used to treat coughs and sore throats, but the report concludes that they do "not believe there is reliable evidence" to prove this before criticising the leadership of Brailsford.

"How can David Brailsford ensure that his team is performing to his requirements, if he does not know and cannot tell, what drugs the doctors are giving the riders?" it concludes.

"David Brailsford must take responsibility for these failures, the regime under which Team Sky riders trained and competed
and the damaging scepticism about the legitimacy of his team’s performance and accomplishments."

British Cycling claimed they welcomed the inquiry and that it had a "catalytic effect on our organisation" in forcing through reforms such as a greater separation between the national body and Team Sky.

This case is also used as an example to express concern over whether "sports federations are capable of investigating themselves when the allegations involve senior figures within the organisation itself".

It adds: "There is a real danger that internal politics inevitably plays a part in the process."

The IAAF responded to the criticism by hailing the "wide sweeping reforms" introduced since Coe's election before vowing to write to the DCMS Committee to explain "some of the more complex aspects of anti-doping that have been misunderstood".

This includes a reference to a "two-year" ban for a first doping offence even though it has been four-years since 2015 - a fact mentioned elsewhere in the report.

The IAAF also promise to seek to "have all of the documents that the IAAF provided to the Committee placed on the DCMS website, as some of it appears to be missing".