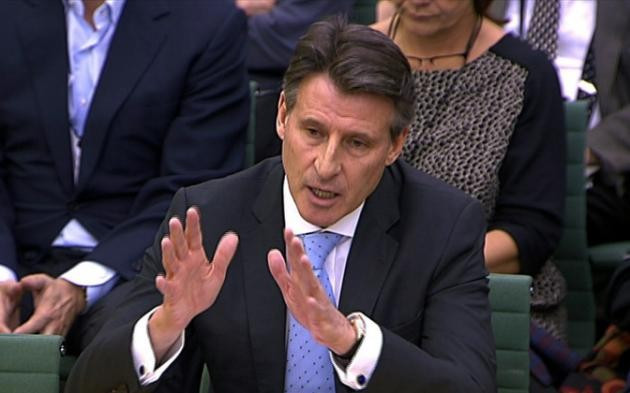 Sebastian Coe admitted here today that he faced a long campaign to restore peoples trust in athletics but that the alternative was unthinkable.

He was forced to defend his sport against accusations of rampant drug abuse and himself personally for not being aware of the extent of the problem before he took over, even though he was vice-president of the IAAF for eight years until he succeeded Lamine Diack as head of the organisation.

The Members of Parliament were also critical of how little he achieved in his role as chairman of the FIFA Ethics Committee between 2006 and 2009 before stepping down.

The Committee has since taken action against a number of leading football officials, including FIFA and UEFA Presidents Sepp Blatter and Michel Platini.

Coe, however, brushed off that would affect his ability to clean up athletics when he was asked why people should believe he is capable of sorting out the mess the IAAF currently finds itself in.

"Because I have the experience to do that." he said.

"I have the support of the sport to do that.

"Have there been failures?

"Will we fix them?

"I'm absolutely focused on doing that.

"If we don't do that, there are no tomorrows for my sport.

"This is the crossroads.

"What do I want out of this?

"I want a sport can again trust. I can put these systems in place.

"But returning trust to the sport is going to be a longer journey.”

Coe claimed he did not have any suspicions that Diack, currently under investigation for accepting money to help Russian athletes who failed drugs tests to avoid suspensions, was corrupt.

"Shock suffused with sorrow and anger," Coe answered when asked how he felt when he was told of Diack's arrest in Paris last month.

More allegations about Diack and other leading IAAF officials are expected to be revealed when the World Anti-Doping Agency (WADA) Independent Commission publishes the second part of its report next month.

Coe admitted that had he been aware Diack was under investigation he would not have described him as the sport's "spiritual leader" following his election to replace him at the IAAF Congress in Beijing in August.

"He was our President...if I had seen the allegations I would probably not have said it," he said.

Coe, who was accompanied by IAAF anti-doping manager Thomas Capdevielle, however, refused to back down on his accusation that stories about blood doping in athletics published by The Sunday Times in August was a "declaration of war" on the sport, although he did concede that he could have chosen other words.

“There are three different issues here," Coe told the inquiry.

"We are dealing with the issue of a management of a blood database, there is then the issue that has arisen from the Independent Commission of WADA about Russia, and there is a third issue that has allegedly implicated a handful of people at the IAAF at being complicit.

"The issue I was trying to make at the time was the reckless use of a database to actually imperil and put at the risk the reputation of clean athletes.

“I will die in a ditch for media groups to challenge my motives, but the issue I took exception to was the very selective use of data to prove positive tests.

“It probably reflected my frustration at the time.

I was being contacted by clean athletes and coaches around the world who were having their reputation impinged."

Coe, though, claimed he respected the work of the media.

Seb Coe in front of @CommonsCMS right now - recognises we've got a global #doping problem. Admits he isn't sure if #Russia ever been clean.— Damian Collins (@DamianCollins) December 2, 2015

"This was never about an attack on the media," he said.

"It was specifically aimed about how clean athletes.

"I stand by the sentiments but I probably would have used different language,”

Related stories
November 2015: Questioning of Coe by British MPs to go ahead on Wednesday in spite of Syria airstrike debate
November 2015: IAAF accused of trying to "muddy the waters" by anti-doping experts following defence of testing regime
November 2015: IAAF claim they are a "pioneer" in fight against blood doping as they clear Radcliffe of doing anything wrong
November 2015: Russian Sports Minister "committed fully" to recommendations on doping, WADA claims
November 2015: Coe resigns Nike role to avoid claims of conflict of interest with position as IAAF President