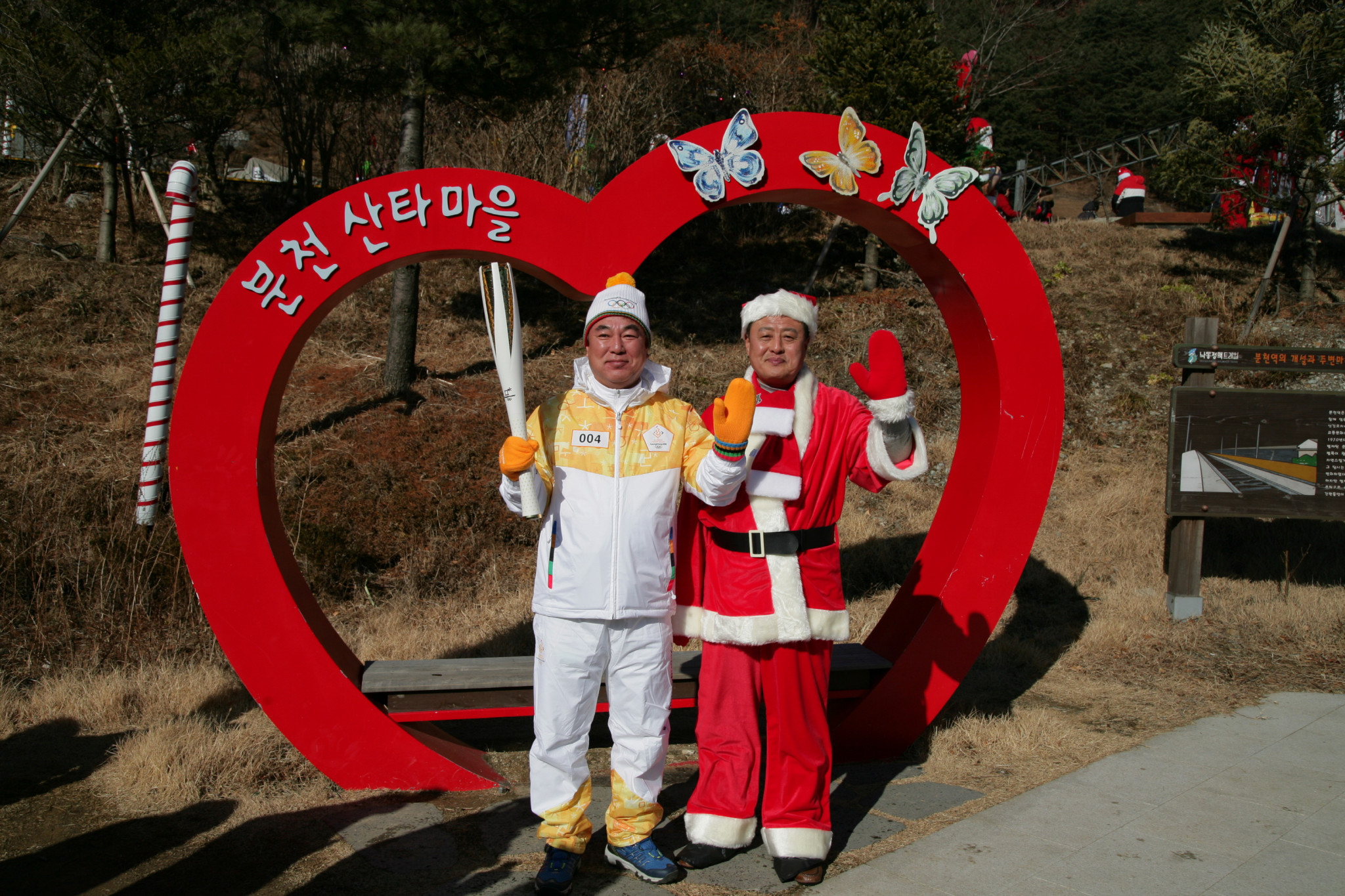 The Pyeongchang 2018 flame pauses today before the cavalcade heads to Daegu to welcome in the new Olympic year.

Daegu had been one of the centres for the 2002 FIFA World Cup and runners will pass the stadium used during the tournament.

In Gumi, an industrial city in the centre of the country, the runners were welcomed by a jazz band playing in sunshine which belied below-zero temperatures.

Earlier in the week, the flame had arrived at the Gangwon Olympic ski venue.

Among the bearers was Kang Han Byeol, an equestrian competitor who works as a ski warden during the winter months.

He will be on duty during the 2018 Winter Games.

"I applied to take part in the Torch Relay to be one step closer to the Games," he said.

"Compared with other sports, there are many unpopular events at a Winter Olympics, but there are not many opportunities to witness these events in person, so it seems that their recognition level lags behind.

"If you enjoy the action as a live spectator, the events can be really interesting.

"I hope that the Olympics will give momentum and more people will take an interest in these winter sports."

Culture has been one of five major themes of the Torch Relay and the arrival of the flame at the UNESCO world heritage site at the Hahoe Folk Village was accompanied by a traditional "Hahoe Pyolshin-Gut Tal Nori" or masked dance.

On Christmas Day (December 25), the official bobble hats worn by Torchbearers were outnumbered by red and white santa hats.

The Relay convoy was also greeted by a trio of Father Christmases at the Santa Village in Buncheon.

The village itself was festooned with green, red and white balloons.

The flame was taken on the V-train.

The line was once an industrial track serving the local coalmines, but has been restored and is now a tourist attraction.

The flame travelled 28 kilometres with stops along the way.

It was a much more leisurely journey than the last week when the KTX high-speed train took the flame on its fastest land-bound leg.

The flame has also been paragliding.

The flight from Yangbang gliding centre lasted a quarter-of-an-hour to the Han River waterfront park.

Organisers have made sure that Olympians from both winter and summer have been included in the Relay.

She carried the flame across the very lake that saw her win gold in Incheon, but travelled as part of an eight.

The flame should also have been carried in Jecheon but the Relay there was cancelled after a fire in a local sports centre claimed the lives of 29 with many others seriously injured.

It is not the first time that an Olympic Torch Relay has been touched by tragedy.

Twenty-five-years ago, Victoria Natalia Agirretxu had been on her way to run with Barcelona's flame when she was killed in a car crash.

In tribute that day, runners carried an unlighted Torch.

Pyeongchang 2018 organisers paid silent tribute to the fire victims and ordered that the welcome ceremony the following evening should be scaled down.