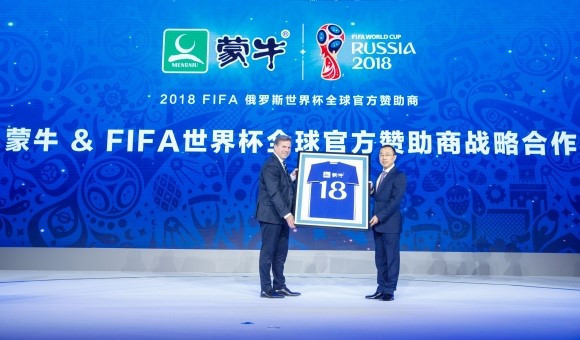 FIFA have signed an agreement with the Mengniu Group, a market leader in dairy products in Greater China, to become the latest official sponsor for the 2018 FIFA World Cup in Russia.

The announcement was made at the China National Convention Centre in the presence of Mengniu Group chief executive Jeffrey Lu and FIFA chief commercial officer Philippe Le Floc’h.

The company’s branding will appear on all key promotional platforms, including FIFA’s digital channels, LED boards and match tickets.

Le Floc’h believes the new partnership could be a key to growing the game.

“Mengniu is one of the biggest dairy producers in the world and is a strong brand in the Chinese market,” he said.

“Growing the game worldwide is one of our key priorities, and we now have another strong official sponsor in such an important region.

“Naturally we will also benefit from the fact that Mengniu’s business appeals to children and youngsters, giving us the opportunity to engage with a new generation of football fans."

Lu added: “Thanks to our sponsorship of the FIFA World Cup, we have an opportunity to reach an even bigger global market and, more importantly, to showcase the Chinese dairy industry to the whole world.

“This is not only a proud moment for Mengniu, but also for the Chinese dairy industry as a whole.”

Mengniu was forced to destroy batches of milk back in 2011 after it was found to be contaminated with a cancer-causing substance.

The FIFA World Cup will take place in cities across Russia from June 14 to July 15.