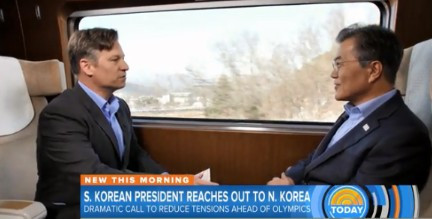 Joint military drills between South Korea and the United States, due to take place during next year's Winter Olympic and Paralymic Games in Pyeongchang, could be postponed to try to help encourage North Korea not to disrupt the event.

South Korea's President Moon Jae-in said during an exclusive interview today with United States broadcaster NBC News the exercises could be postponed if Pyongyang halted its nuclear and missile tests before Pyeongchang 2018.

"If North Korea stops its provocations leading up to the Pyeongchang Olympics, it will greatly help in holding a safe Olympics," Moon said.

"Also, it will help in creating a conducive atmosphere towards inter-Korean as well as US-North Korean dialogue.

"It is possible for South Korea and the US to review the possibility of postponing the drill.

"I have made such suggestion to the US and the US is currently reviewing.

"It all depends on how North Korea behaves."

South Korea's elite marine corps and their colleagues from the US regiment are currently holding military exercises in Pyeongchang.

The three-week exercises at the Mount Hwangbyeong training camp started earlier this month.

It involves more than 220 South Korean troops and 220 soldiers stationed in Okinawa in Japan.

The two sides have staged such a combined winter drill since 2013, aiming to sharpen their combat skills in sub-freezing temperatures.

The exercises have also been partly to help the preparations for South Korean marines for Pyeongchang 2018.

Gangwon Province, where the Winter Olympic and Paralympic Games venues are located, is just 50 miles away from the heavily fortified border with North Korea.

Military exercises are jointly staged by South Korea and the US around March every year.