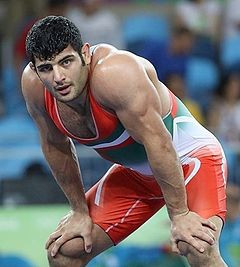 An investigation has been launched into a match between Russia's Alikhan Zhabrayilov and Alireza Karimi at the recent Under-23 Wrestling World Championships in Poland following claims the Iranian deliberately lost to avoid a meeting with an Israeli wrestler in the next round.

United World Wrestling (UWW) has confirmed it is looking into the allegations that Karimi's coach ordered him to lose the contest as he would have gone on to face Israel's Uri Kalashnikov in the second round of the under 86 kilograms category.

In a statement, UWW said they were investigating "irregularities" surrounding the match.

"As reported in several news outlets it's believed that Karimi was directed by his coaches to lose the match in avoidance of a potential second-round opponent," the statement added.

Zhabrayilov, who went on to win the gold medal in the category, comfortably won the bout 14-3 and went on to thrash Israel's Kalashnikov 10-0 in round two.

He told the news agency Iranian Students News Agency that he was leading the match 3-2 when his coach told him he should deliberately lose.

Iranian wrestler Alireza Karimi about to beat Russian, but will have to face Israeli next round. His coach his calling him from the sidelines, telling him to “lose.” Iran forbids its athletes to play Israeli’s. Iranian wrestler gives up. pic.twitter.com/nX9KHaH8Jn

"In a moment, my whole world seemed to come to an end," he said.

"I tried hard for months to get the world gold medal.

"Achieving a world medal is the only happiness for any of us."

The Iranian Government thanked Karimi for losing the match, claiming he had performed an "noble and heroic action".

He was also labelled as a "source of pride and praise".

Iran and Israel do not have diplomatic relations and are seen as bitter enemies.

Athletes from Iran have been known to pull out of matches against Israeli opponents and are often thanked for doing so by their Government.