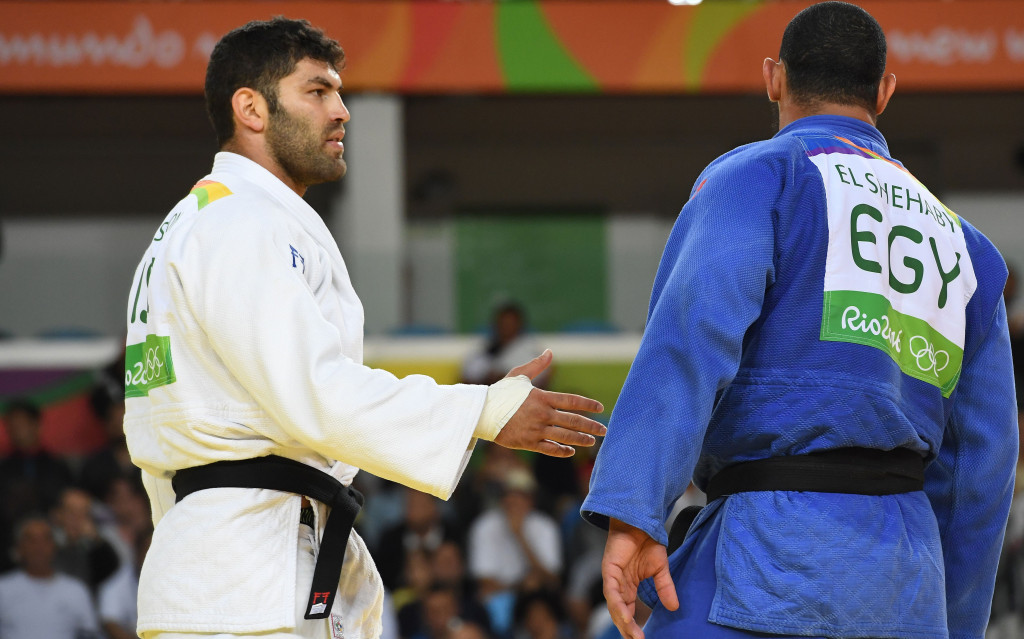 An incident involving an Egyptian judoka refusing to shake the hand of his Israeli opponent has been played down by the International Olympic Committee (IOC), who claim "these things happen" in the heat of the moment.

Islam El Shehaby was loudly booed by the crowd after a refusing to shake the hand of fifth-ranked and eventual bronze medal winner Or Sasson following an over 100 kilograms preliminary round loss this morning.

He lay prostate on the mat following his defeat by ippon before standing-up to face Sasson in order for the referee to formally declare the fight over.

Sasson then extended his hand for the shake, a major part of judo etiquette, before El Shahaby shook his head and backed away.

The 33-year-old, a bronze medallist at the 2010 World Championships, had come under pressure from Islamist and nationalist voices in Egypt to withdraw entirely from the fight.

"Things happen in the heat of the moment that are not acceptable," said International Olympic Committee Presidential spokesman Mark Adams.

"We would remind all athletes of the Olympic Games values.

"The Olympic Movement should always be about building bridges not erecting walls.

"I would like to understand from both teams what happened."

The IOC have set up a Disciplinary Commission to investigate the incident.

It marks the latest incident involving athletes from Israel and the Arab world during these Olympics.

A Lebanese official has been "reprimanded" by the IOC after refusing to allow Israeli athletes to share a bus with his team following the Opening Ceremony.

“The bus driver opened the door, but the head of the Lebanese delegation blocked the entrance,” revealed Israeli sailing team trainer Udi Gal.

"The organisers wanted to avoid an international and physical incident so sent us away to a different bus.”

Lebanese Chef de Mission Salim al-Haj Nicolas claimed the bus had been reserved solely for his team but Israeli sailing coach Udi Gal said he was "shocked and outraged".

Saudi Arabian judoka Joud Fahmy has also been accused of deliberately forfeiting her first round contest in the under 52kg division in order to avoid Israel's Gili Cohen in the second round.

The Saudi Arabian team claim she pulled-out due to injury.

A "clear message" warning against discriminating against athletes from particular countries was given by the IOC following last year's Olympic Summit in Lausanne.

Any persecution will result in a tournament being stripped of recognition as a "proper event", they said, such as one where Olympic qualifying points are available.

These rules have rarely been enforced, however, with the only exception coming last December when the Asian Shooting Championships in Kuwait City were stripped of their Olympic qualification status.

This was because the designated International Shooting Sport Federation (ISSF) technical delegate, Yair Davidovich of Israel, was denied a visa by the Kuwaiti Immigration Department.

An ongoing political feud with Kuwait and the sports world which has led to the Gulf nation being banned from these Games was also thought to be at the heart of the decision, however.