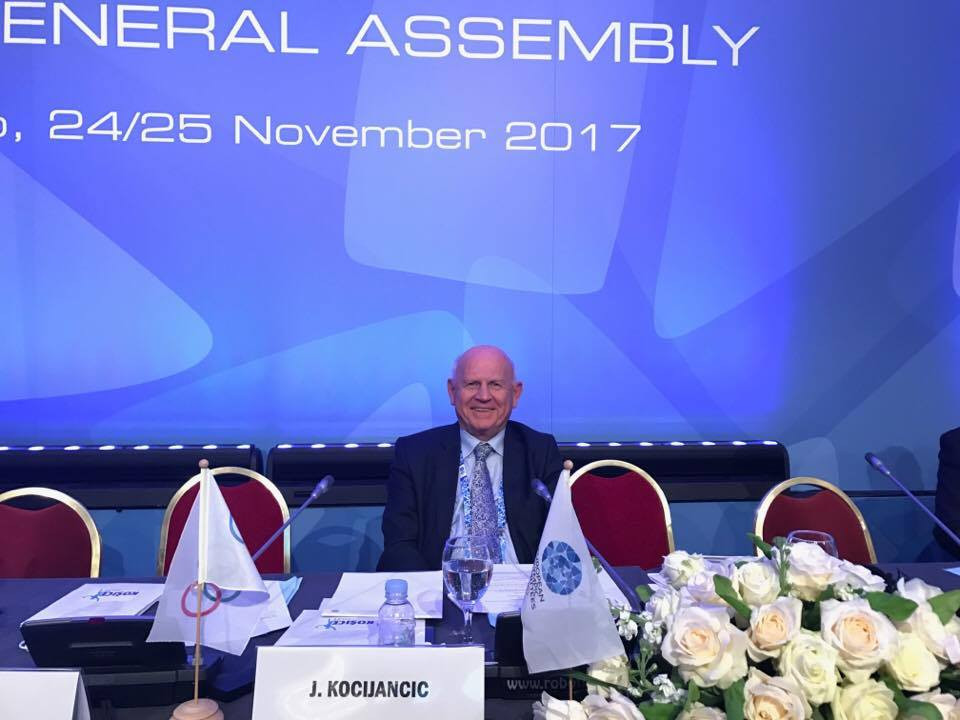 Janez Kocijančič has been elected permanent President of the European Olympic Committees (EOC) by acclamation to replace Patrick Hickey today.

Kocijančič, the 76-year-old Slovenian who has served as acting President since August 2016, was uncontested for the position at the body's General Assembly here.

Niels Nygaard of Denmark was elected vice-president after securing 27 of 50 possible votes in a two-horse race.

"I was not completely sure if I should be a candidate or not because of my age," Kocijančič told insidethegames afterwards.

"My colleagues were obviously satisfied with the way I did it [the acting Presidency].

"There's always a lot of satisfaction [for him, winning] but there will be a lot of difficult tasks.

"I think the European NOCs should be stronger in voice, proposals and responsibility.

"I would like us to have a more autonomous financial position and our own marketing strategy.

"We should remain an integral part of the International Olympic Committee (IOC) but I think that they need us more than they know and they need us to be more independent than we are.

"Independent partners are the best allies."

Italy's Raffaele Pagnozzi and Kikis Lazarides of Cyprus were also both elected unopposed for the respective secretary general and treasurer roles.

Greece's Spyros Capralos and Serbia's Djordje Visacki led the 11 figures elected to the Executive Committee so far with a joint leading total of 41 votes.

Jean-Michel Brun of France followed closely with 40 while Andrzej Krasnicki of Poland and Zlatko Matesa of Croatia each managed 37.

Daina Gudzineviciute of Lithuania and Liney Rut Halldorsdottir of Iceland were the two female candidates elected, with 36 and 33 votes respectively.

Josef Liba of Slovakia and Alejandro Blanco of Spain - who was absent after suffering a fall which required surgery en route to Zagreb - each garnered 31 votes.

Peter Mennel of Austria and Yury Yuriev of Russia each received 26 votes to require a tie breaker for the 12th and final spot tomorrow.

Germany also lost their EOC Executive Committee representative after Gudrun Doll-Tepper could only muster 21 votes for a share of 14th place after challenging for a position previously held by Michael Vesper.

Kocijančič said he was not worried about the overtly Eastern European spread of ruling board but said that those who had lobbied and campaigned the best had been rewarded.

He hopes unsuccessful candidates will still remain involved in EOC Commissions and in other areas.

Hickey self-suspended himself from all of his sporting positions following his arrest at the Rio 2016 Olympics.

In May, it was exclusively revealed by insidethegames that Irishman Hickey would not be returning to lead the continental body as he continues to fight charges in Brazil - which he denies - relating to alleged involvement in a ticketing scam.