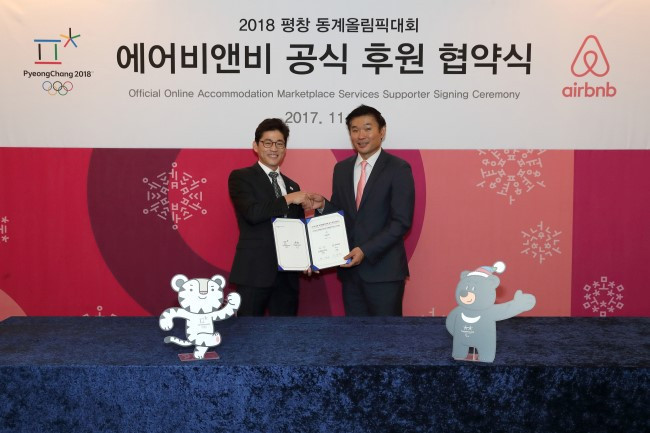 Airbnb Inc has signed an agreement with the Organising Committee of the 2018 Pyeongchang Winter Olympics to handle the influx of visitors.

It has said it will work with the local community to provide accommodation options for visitors to the city, which is located some 180 kilometres east of South Korea's capital, Seoul.

Earlier this year, Airbnb signed an agreement with Gangwon Province, where Pyeongchang is located, to provide lodging and promotional support for the Olympics.

"With the eyes of the world focused on Pyeongchang, our community is stepping up and providing guests with unique and local travel experiences," said Chris Lehane, Airbnb's head of global policy and public affairs.

During last year's Rio Olympics, 48,000 Airbnb listings housed 85,000 of the city's estimated half-a-million visitors, according to the company.

Uhum Chan-wang, director of the Organising Committee, thanked the company for becoming an official sponsor.

The Pyeongchang Olympics are not the only sporting event in South Korea that Airbnb has become associated with.

In August 2016, it signed a Memorandum of Understanding with South Chungcheong Province to solve problems of accommodation relating to the country's National Sports Festival.

Founded in 2008, Airbnb helped Philadelphia with accommodation for the visit of Pope Francis in 2015, and has played a similar role with many other cities for major events.

Ticket sales for the Games have been disappointing so far, partly because the Summer Olympics will be taking place in Tokyo in 2020, which would affect visitor numbers.

There are also well-documented political tensions in the Korean Peninsula, with North Korea's missile launches being followed by a war of words between its Supreme Leader, Kim Jong-un and United States' President Donald Trump.

South Korea's former Prime Minister Han Seung-soo claimed that political upheaval in the country has been the main reason behind the declining interest in the Games.

A sales update last month revealed that only 30.3 per cent of the 1.07 million tickets organisers hope to sell for next year's Games have been snapped up.