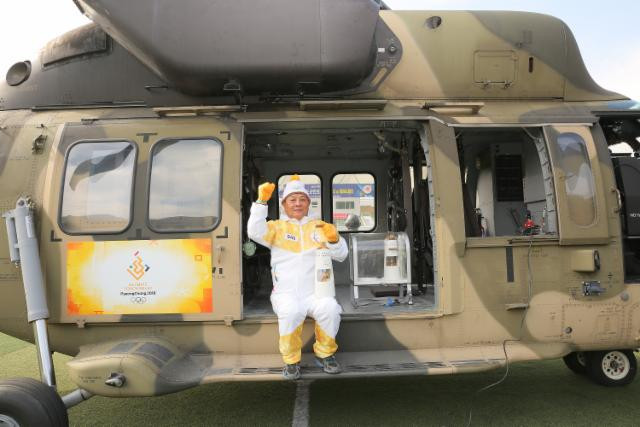 The Olympic flame has reached Mokpo at the south-western tip of South Korea, where it has come across a familiar face.

Singer Park Ae-ri performed the Pyeongchang 2018 Torch anthem ‘’’Let Everyone Shine’’ as it left Athens three weeks ago and was now on hand to greet the Relay in her home town.

She sang at the Mokpo Peace Plaza, an area dedicated to Kim Dae-jung, the former South Korean President who won the Nobel Peace Prize in the year 2000.

Another Mokpo resident, Chong Soon-man, had been one of the trio who lit the final cauldron for the 1988 Games in Seoul, so the town can really point to some authentic Olympic heritage.

Another boyband, "Noel" performed as the flame arrived.

Organisers have designated the environment as one of five themes for the Relay as it crosses Korea and 400 support runners dressed in traditional Hanbok costumes linked hands in the Suncheon Bay National Park as the runner came by.

They presented a flash card display as part of the performance "like a flower blossoming from the mountain top’’ and performed the traditional Ganggangsullae, a dance accompanied by song.

This was meant to invoke memories of the Korean Harvest moon festival, when dozens link hands and sing and dance in similar fashion in a ritual which is said to date back some 5000 years.

For the last four years he has led a group of around 100 ‘’Jihwani ‘’ students who climb the Jiri Mountain and collect litter.

‘’I hope to protect the Olympic Torch in the same way as we protect the country’s environment.

"I will carry the Torch with the mind of transporting the refreshing spirit of Jiri Mountain to Pyeongchang,‘’ he said.

In Yeosu, the flame travelled in a cable car above the waters which in the words of the organisers combined ‘’open natural beauty with a thrilling and unique cable car ride leading to the extravagant beauty of the Yeosu beach’’.

The flame also visited the Expo Centre, which has the theme ‘’The Ocean is alive’’.

An air rescue helicopter has carried the flame for 105 kilometres on one of its longest legs so far.

It took off from Jindo Island and was piloted by Lieutenant Seo Gi-wan, who normally answers emergency calls from a thousand small islands dotted around the waters of Sinan in south-west Korea.

After a flight lasting an hour, it landed at the South Jeolla base.

The passage of the flame by traditional ‘’Turtle’’ ship, was always going to be one of the highlights of the entire Relay and so it proved.

The craft, a replica of the ironclad vessels of the 16th century, boasted a huge dragon as figurehead.

As it sailed through the harbour at Teongyeong, it flew the Olympic flag and the gold and white sail bore the symbol of the Pyeongchang Torch Relay as the bearer, dressed in the traditional costume of the warrior, held the Torch at the bow of the ship.

Kim Kyu-hwan, a lieutenant in the Korean navy, also held the Torch on a more modern craft as it passed the coastal city of Changwon.

He was a member of the Cheong Hae Anti Piracy Unit which rescued a Korean vessel held hostage in the Gulf of Aden back in 2011.

From the grandeur of mighty ocean-going ships, the flame also travelled on a tiny traditional fishing boat on a waterway in the Upo Wetlands, in Changnyeong.

Organisers had cast the net wide for ideas for the Torch Relay in a special contest earlier in the year and one of the winners was school teacher Choi Da-hyun, who carried the flame in Gangjin.

‘’Pyeongchang 2018 made me rediscover my value," she said.

"Until recently I was afraid of the word challenge but running in the Torch Relay has redoubled my confidence.’’

He was encouraged to apply after seeing a photo of his grandfather doing the same during the relay to Seoul.

‘’When I saw the photo, I immediately thought I wanted to be a Torchbearer like him.

"After hearing the news that I was chosen, I called him.

"He told me he was very proud of me.

"He called it an honour for the family.

"I want to put the photo of me running with the Olympic Torch next to his.’’