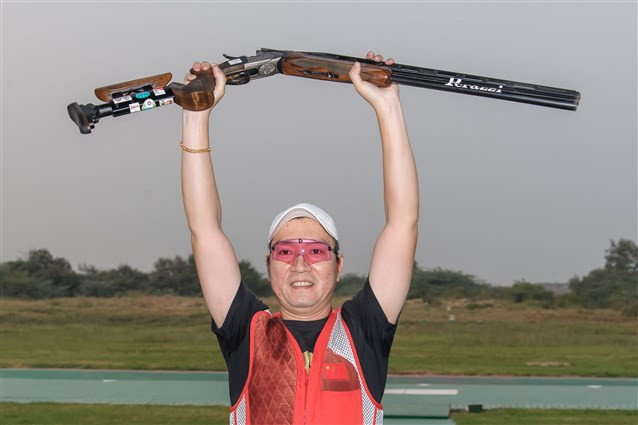 The 39-year-old hit 79 out of 80 clays at the Dr Karni Singh Shooting Range to win the first ISSF crystal globe of his career and add to the bronze medal he claimed at the World Shotgun Championship in Moscow in September.

Sailing towards gold, Hu put a substantial gap between him and his main rival, Sangram Dahiya of India, who eventually finished in second place with 76 hits.

The podium was completed by Italy’s Davide Gasparini, who scored 56 clays out of 60.

Participating in his tenth World Cup Final, the 41-year-old held the lead for most of the final, shooting consistently and missing the 10th ring only once in the whole competition.

He finished with 250.6 points, 0.7 above the previous record set on the very same range.

The duo swapped places throughout the match, entering the last and decisive series with a 0.1 gap in Omelchuk’s favour.

Mikec then fired a consistent 9.8 and 9.9 combination, which turned out to be enough to beat the 9.4 and 8.8 produced by Omelchuk.

Finishing with 229.3, Mikec took gold while Omelchuk had to settle for silver on 228.0.

The bronze medal was collected by India’s Amanpreet Singh with 202.2.

Kim battled through the final alongside China's Zhang Jingjing, the world number one.

Zhang held top spot from the first to the penultimate series, but finished tied with Kim at the end of the 10th.

With both shooters at 34 total hits, a shoot-off for the gold was required.

At the most crucial moment, Kim shot perfectly, nailing a five-hit series and taking the title, while Zhang hit a three to finish in second.

At the end of the ninth series both Kim and Zhang were tied at 30 hits with Serbia’s 30-year-old Zorana Arunovic, who then lost the following three-way shoot-off to take bronze.