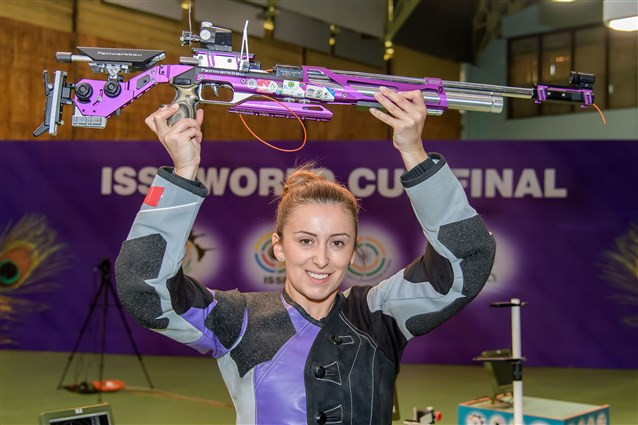 The 30-year-old took the lead in the final during the first series at the Dr Karni Singh Shooting Range.

Her rivals proved unable to catch up as the competition progressed.

Arsovic pulled further clear by managing 23 consecutive shots inside the 10th ring, which helped her finish on a score of 251.3 points.

Romanian shooter Laura-Georgeta Coman secured the silver medal by achieving a tally of 249.7, while Peng Xinyi of China rounded off the medal positions by taking bronze on 228.5 points.

Matsuda ended with a score of 241.8 points to claim the ISSF crystal globe for the first time in his career.

Ukraine’s Pavlo Korostylov secured the silver medal, with the 19-year-old finishing on 241.1 points

His effort equalled the junior world record for the event.

The bronze medal was earned by Oleh Omelchuk, after the Ukrainian ended of a total of 218.8 points.

The pair had both set a world record of 59 targets hit from 60, forcing them into the shoot-off.

Llewellin missed with his fourth shot of the additional period of the final, which allowed Filippelli to claim the victory.

The podium was completed by Argentina’s Federico Gil, who hit 49 of his 50 targets during the event.