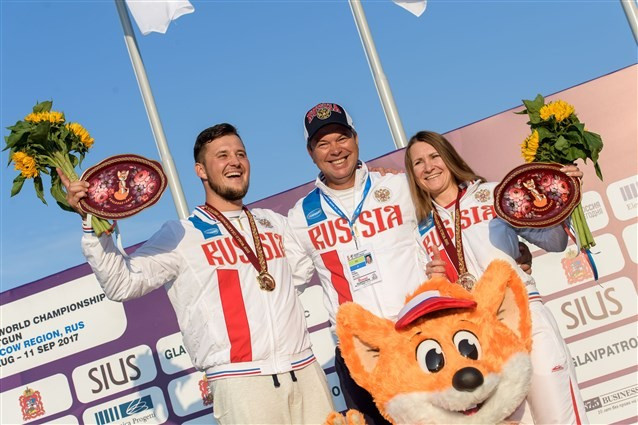 Home pairing Nikolay Teplyy and Nadezda Konovalova brought the International Shooting Sport Federation (ISSF) Shotgun World Championships in Moscow to a popular conclusion as they became the first ever gold medallists in the skeet mixed team.

The Russian team defeated United States pair Hayden Stewart and Dania Jo Vizzi with 30 hits to 27 out of a possible 32 at the Fox Lodge Shooting Range, with 30-year-old Teplyy contributing the only perfect 16 score of the final.

"It’s a beautiful victory for us," Teplyy said after the award ceremony.

"To close the competition with a gold medal, here in our country, is unbelievable.

"We felt all the support from the crowd, it was unreal!

"It’s the best achievement of my life."

"We prepared a lot for this match, and we want to thank the Federation, the coaches, our families and all the fans for the great support."

In the bronze medal match, Tammaro Cassandro and Katiuscia Spada of Italy beat China’s Wei Meng and Zhang Fan by 28-26.

Russia finished third in the medals table with eight in total, including one individual and one team gold.

Italy were top with 17 medals from the 22 events that took place between August 30 and today, including four individual and five team golds.

The US were second with 12 medals, including two individual and three team gold.

American competitors produced two world records in the course of the Championships, with the women’s skeet team of Kimberly Rhode, Dania Jo Vizzi and Caitlin Connor recording 216 hits, one target more than the previous record.

The US junior women’s skeet team also beat their category’s world record of 206 hits as they scored 211.

Speaking at the closing ceremony, the ISSF technical delegate, Petros Kyritsis, said: "We hope to see you all at the next ISSF World Championships in all events that will take place in Changwon, Korea, in 2018.

"We also thank all the members of the organizing committee, the Russian Shooting Union and its President, Mr. Vladimir Lisin, for this excellent competition -  Spatziba!"

The Championships involved some 640 athletes from 76 countries competing in 22 medal events, including separate junior events.

The 2017 ISSF Season is due to conclude next month at New Delhi in India, where the 2017 ISSF World Cup Final will take place from October 23 until 30.