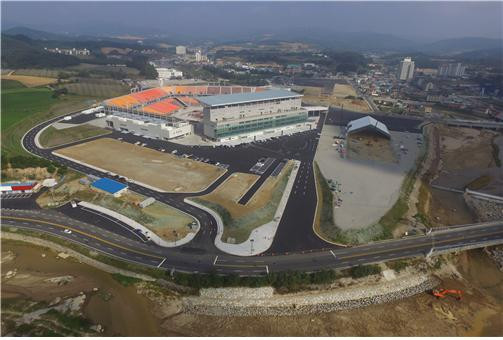 Pyeongchang 2018 has officially finished the stadium that will host the Opening and Closing ceremonies for next year’s Olympic and Paralympic Winter Games.

The final work was completed 22 months after ground was first broken on the site in December 2015.

The seven-storey structure, with a total floor area of 58,790 square metres and a capacity of 35,000 spectators, is located in the Pyeongchang Olympic Plaza.

The circular stage is 72 metres in diameter.

The venue is a pentagon, South Korean officials claim, symbolising the five goals of Pyeongchang 2018 - the economy, the environment, IT, the arts and peace.

Alongside the stadium, the Culture and ICT Pavilion and the Medal Plaza have been constructed as temporary buildings in the Pyeongchang Olympic Plaza.

The two-story Culture and Information and Communications Technology (ICT) Pavilion will have exhibitions on the first floor,featuring works by media artist Nam June Paik and other contemporary artists like Lee Jung Seob and Park Su-geun.

On the second floor, there is an ICT zone where visitors can experience advanced Olympic technologies.

The one-floor Medal Plaza , 1,267 square metres in size, will be used as a venue for awarding the Olympic medals.

"The building for the Opening and Closing ceremonies has been finished, but we will have to keep working on the stage and other facilities during the remaining time," Pyeongchang 2018 President Lee Hee-Beom said.

"After the Olympic Games come to an end, the 35,000 seats in the stadium and permanent buildings will all be demolished and used as a venue for performances, exhibition art and sports."