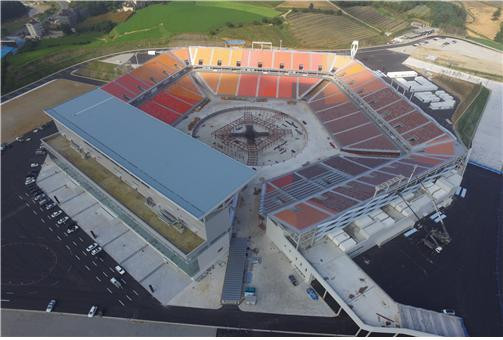 The Pyeongchang Olympic Stadium, the venue for the Opening and Closing Ceremonies of next year's Winter Olympic and Paralympic Games, is set to be completed tomorrow.

After just under two years of construction the 35,000 capacity venue, which is shaped as a pentagon, will be finished tomorrow.

It is scheduled to host the Opening Ceremony of Pyeongchang 2018 in less than five months time on February 9.

The Closing Ceremony is pencilled in for February 25 before the Paralympics open and close on March 9 and 18 respectively.

"The Pyeongchang Olympic Stadium will be completed on September 30, one year and 10 months after ground was broken in 2015," said Pyeongchang 2018 President, Lee Hee-Beom.

After the Games, the 35,000 temporary seats and buildings will be removed.

The site will be turned into an Olympic Memorial Hall and a sports facility.

The venue, the central part of Pyeongchang's Olympic Plaza, has seven floors aboveground and one level underground.

Every day, medal ceremonies and various cultural events will be staged at the Medal Plaza, located near to the stadium.

The Olympic Plaza also boasts a cultural hall, which will showcase exhibitions, performances and artistic events throughout the Games.