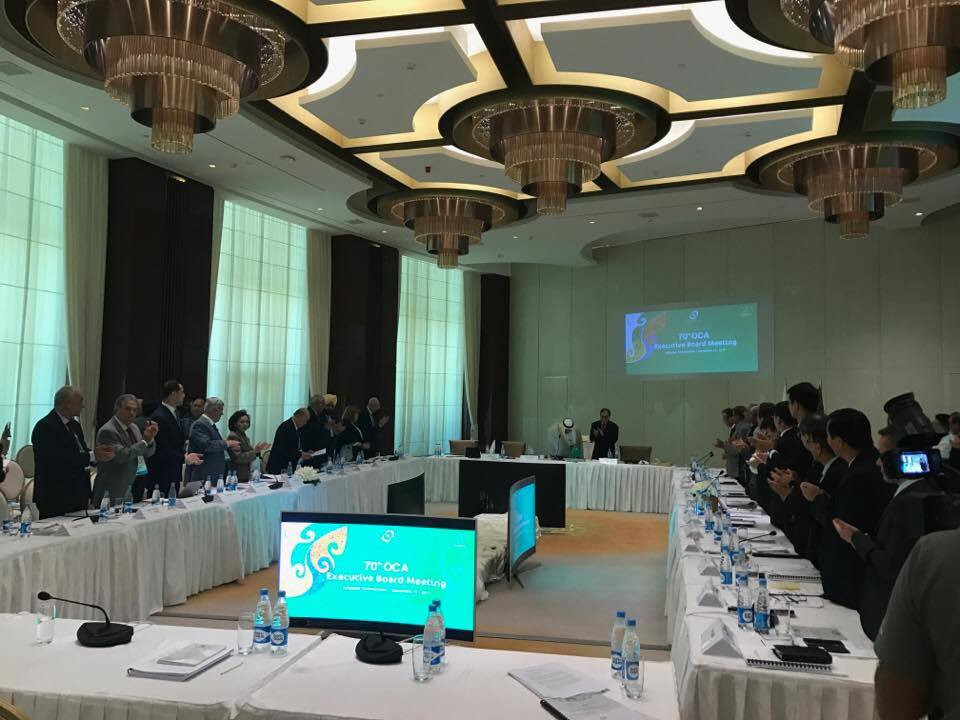 Members of the Olympic Council of Asia (OCA) Executive Board have delivered a ringing endorsement for their President Sheikh Ahmad Al-Fahad Al-Sabah following corruption allegations which an Ethics panel concluded were "fake and fabricated".

The Kuwaiti was identified in a United States Department of Justice (DoJ) document in April in a case involving Guam's Richard Lai, who pleaded guilty to charges of receiving nearly $1 million (£773,000/€915,000) in bribes connected to football governing body, FIFA.

Both officials repeatedly denied any wrongdoing and it was claimed that Lai was only paid for work done as an OCA employee.

Sheikh Ahmad did, however, swiftly resign from all footballing roles including his membership of the FIFA Council.

He has also adopted a lower profile on the international sporting stage, opting not to attend recent International Olympic Committee (IOC) Sessions in Lausanne and Lima.

The Kuwaiti official briefly left the room during a meeting here today to allow his colleagues to "discuss" the situation before he returned to a standing ovation.

"We are here as people who love sport as a hobby," Sheikh Ahmad said after his return.

"We are not here for our benefit.

"I work for reform at the IOC, at FIFA, at ANOC [the Association of National Olympic Committees, where he is also President] and I know what I am doing.

"If there's a politician who wants a war, this is their job, not my job, I will maintain."

He also claimed that, like the OCA, the IOC and FIFA have "already decided" on their investigations, heavily implying that they have already deemed him innocent.

IOC Executive Board member and ANOC secretary general Gunilla Lindberg and IOC deputy director general Pere Miró were among those to participate in the standing ovation.

insidethegames has contacted the IOC for clarification of their position.

Ethics Commission chair Wei Jizhong - the OCA honorary life vice-president and a close ally of the continental body's leadership - had earlier delivered a short report in which he absolved both Sheikh Ahmad and director general Al-Musallam of any wrongdoing.

"Our Ethics Commission has two main jobs," declared the Chinese official, a former President of the International Volleyball Federation.

"Firstly, to investigate all cases of violation.

"To protect the personal high reputation and image of OCA official bearers against any so called allegations.

"One case happened this year.

"Someone slandered the OCA President and director general by fabricating allegations.

"A panel of the Ethics Commission has conducted an investigation and hearing.

"The unanimous conclusion of this panel was that all these allegations were fake and fabricated.

"This conclusion has been communicated to all the organisations related."

No written report or conclusions were provided nor were any further details given of how they conducted their investigation.

In a separate allegation, Al-Musallam had also denied "deliberately timed" attacks which claimed he requested a personal cut of sponsorship deals.

This emerged shortly before his re-appointment as first vice-president of the International Swimming Federation (FINA) in July.

British newspaper The Times and German magazine Der Spiegel reported details of an audio recording taken during a meeting between Al-Musallam and other OCA officials with a prospective Chinese marketing agent allegedly held during the 2012 Asian Beach Games in Haiyang.

He claimed all the money went to the OCA rather than his or any other officials personally.

Both Sheikh Ahmad and Al-Musallam are also involved in a dispute with Kuwaiti authorities which has led to the OCA vacating their headquarters there.

The Gulf state has also been suspended by the IOC and other sports bodies.

Wei also did not specify which specific allegations they have explored in his report today.

Hong Kong's OCA vice-president Timothy Fok, who was left briefly in charge in Sheikh Ahmad's absence, then said that the President has been "extremely honourable" and "should not even have to leave the room".

Raad Hammoodi Salman Al-Dulaimi of Iraq - a former football international goalkeeper - was among others to offer support and was the only person to refer directly to any allegations.

"I know this Richard Lai, I know him very well personally," he said.

"He was with us and [it was] all OCA activities, even in football activities.

"In the Asian Games, he is with us and, I agree, this guy [Sheikh Ahmad] is very good guy and all we sit here we know this story and we agree this guy is good guy."