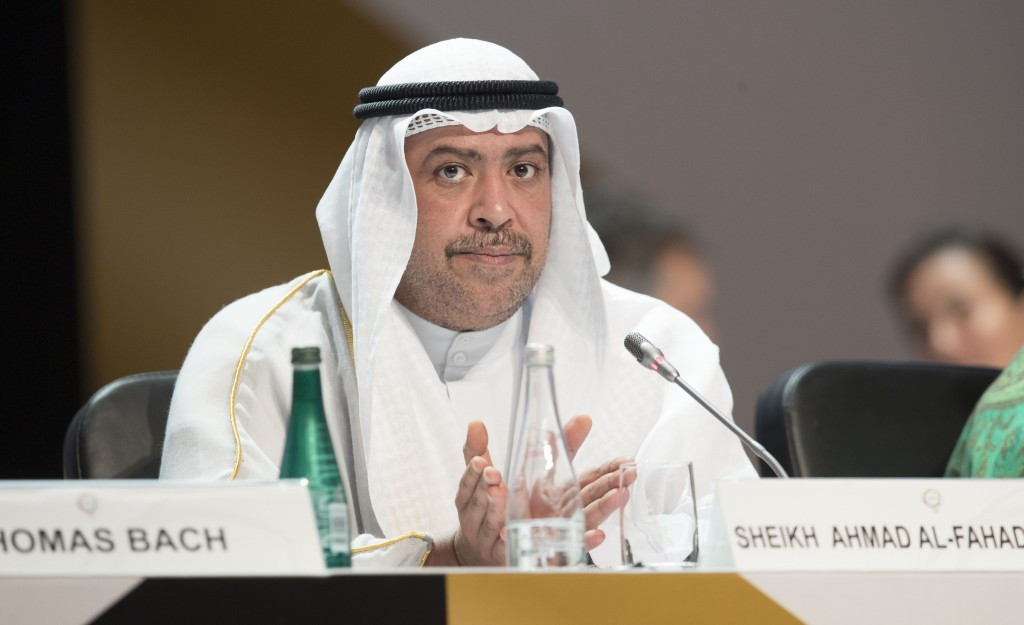 Sheikh Ahmad Al-Fahad Al-Sabah has resigned from all of his roles within football after the key sporting powerbroker appeared to be identified in a United States Department of Justice (DoJ) document in connection with their corruption investigation.

The Kuwaiti was a member of the FIFA Council, the FIFA Reform Committee and the Asian Football Confederation (AFC) Executive Committee but said in a statement today that it was in the "best interests" of the two organisations if he stepped down.

He strongly denies any wrongdoing.

Sheikh Ahmad, President of the Association of National Olympic Committees (ANOC) and the Olympic Council of Asia (OCA), has also withdrawn his candidacy for re-election to FIFA's ruling Council.

The announcement comes less than two weeks before world football's governing body holds its annual Congress in the Bahrain capital of Manama on May 11.

The AFC are due to stage their Congress on May 8, where the organisation will hold FIFA Council elections.

"With regards to alleged illegal payments to Richard Lai, I can only refer to my previous statement and vigorously deny any wrongdoing," read a statement by Sheikh Ahmad today.

"I intend to work with all relevant authorities to disprove these for me totally surprising allegations.

"However, I do not want these allegations to create divisions or distract attention from the upcoming AFC and FIFA Congresses.

"Therefore, after careful consideration, I have decided it is in the best interests of FIFA and the AFC, for me to withdraw my candidacy for the FIFA Council and resign from my current football positions.

"I have been honoured to serve on the FIFA Council, FIFA Reform Committee and AFC for the last two years and I will continue to support the family of football once these allegations have been disproved."

In an OCA statement yesterday, Sheikh Ahmad "strongly denied" any wrongdoing after the DoJ seemingly identified him as "co-conspirator number two" in the case involving Guam's Lai, who pleaded guilty to charges of receiving nearly $1 million (£773,000/€915,000) in bribes.

The document listed a "high-ranking official of FIFA, the Kuwait Football Association (KFA) and the OCA".

It also said the Kuwaiti official was then elected onto the Executive Committee, which has since been rebranded as the FIFA Council.

Sheikh Ahmad vowed to "vigorously defend his integrity and reputation" over the claims he was involved in Lai's bribery.

In a statement sent to insidethegames yesterday, the International Olympic Committee (IOC) said Sheikh Ahmad had "put himself at the disposal" of the FIFA Ethics Committee following the accusations.

The IOC also revealed he had "informed the IOC chief ethics and compliance officer".

It is not yet known whether this will have any affect on his various positions within the Olympic world, where he is considered a pivotal figure.

He was instrumental in helping Thomas Bach's election as IOC President back in 2013.

Sheikh Ahmad was cleared by the AFC to stand for re-election to the Council last month.

He could have been excluded from the race as the Kuwait Football Association (KFA) remains suspended from FIFA after a new law led to the dissolution of existing bodies, including the Kuwait Olympic Committee (KOC), and their replacement with Government-backed rivals.

Lai, a former member of the AFC and the FIFA Audit and Compliance Committee, has been suspended for 90 days by world football's governing body and has also been provisionally banned by the AFC.