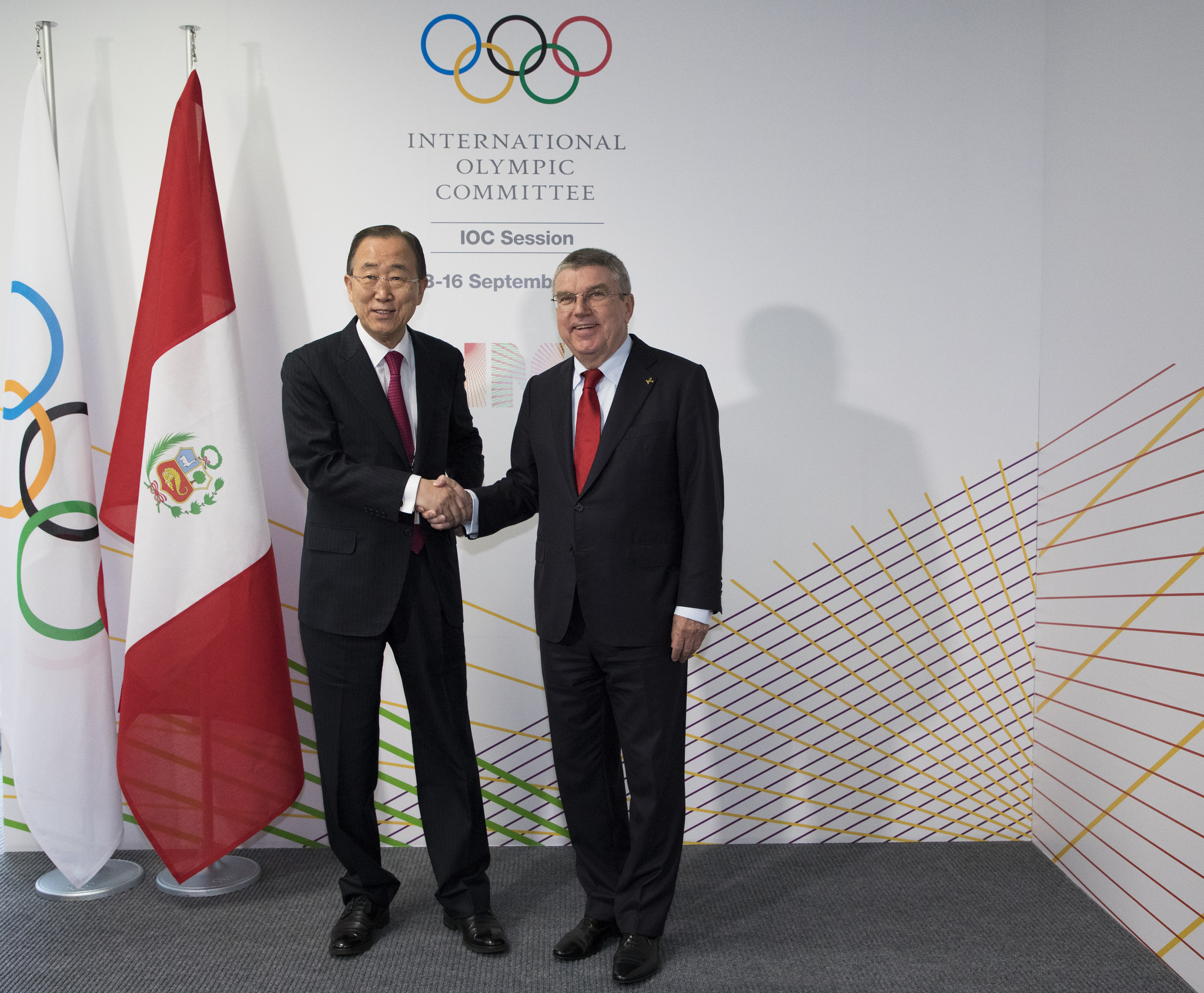 Former United Nations Secretary-General Ban Ki-moon has promised to improve the accountability and transparency of the International Olympic Committee (IOC) after he was elected the new chairman of the Ethics Commission here today.

Ban, the only candidate to replace outgoing chairman Youssoupha Ndiaye, made the promise after he received 74 of the 78 valid votes cast.

The 73-year-old South Korean was proposed by the IOC Executive Board and he will officially begin his work following the conclusion of the Session here.

Ban, who served as the eighth official UN Secretary-General from January 2007 until December last year, vowed to "further promote the importance of good governance and transparency within the IOC".

The IOC is desperately trying to improve its image following accusation of vote-buying in the Olympic Games bidding process and other corruption allegations against senior members.

"I believe that ethics is essential to any successful organisation and that is why I did everything possible to strengthen the culture of ethics at the UN," Ban said.

"I promoted transparency and accountability and tried to lead by the best example.

"I will work very closely with the IOC members and all the sport organisations to make the IOC have trust and confidence from the international community."

Several IOC members lined up to voice their concerns on the current credibility issues facing the body and how it has not done enough to tackle the problem.

In a display of frustration from the more vocal parts of the membership, Audit Committee chairman Pierre-Olivier Beckers warned the IOC it was "urgent" that the organisation regains its credibility, while New Zealand's Barry Maister and Britain's Adam Pengilly also spoke out.

"We continue to suffer terrible weather in the IOC and my wish is that we are not affected by these storms any more," Beckers, former President of the Belgian Olympic Committee, said.

In response, Pengilly warned that the "storms have been around us as members".

St Lucian IOC member Richard Peterkin said the IOC were getting "hammered" on a daily basis and that the organisation had been "betrayed by continual acts of corruption".

IOC President Thomas Bach had previously claimed individuals, and not the governing body itself, were at fault for their worsening reputation.

"The IOC is honoured that Mr Ban has accepted this responsibility," said Bach.

"It shows the trust and standing this Commission enjoys within and outside the world of sport."

There is now a widespread evidence that Rio 2016 paid bribes to IOC members during their successful campaign to host the Olympic and Paralympic Games.

Rio 2016 President Carlos Nuzman is under investigation for his alleged involvement in a vote-buying scheme and had his house raided last week.

Senegal's disgraced former International Association of Athletics Federations President and IOC member Lamine Diack is suspected of being at the centre of the scandal.

The IOC Ethics Commission are also investigating payments allegedly made to IOC member Frankie Fredericks by a company linked to a Brazilian businessman in 2009, three days before Rio de Janeiro was named as the 2016 host city at the Session in Copenhagen.

As well as the vote-buying claims, the IOC's reputation has also taken a hit as a result of allegations of wrongdoing against several senior officials, including Ireland's Pat Hickey and key Kuwaiti powerbroker Sheikh Ahmad Al-Fahad Al-Sabah.

Hickey has resigned from the IOC Executive Board with "immediate effect" as he seeks to clear his name from charges of theft, tax evasion, money-laundering and criminal association following his arrest in Brazil last year.

The Irishman is currently "temporarily self-suspended" but is still hoping to return as an ordinary IOC member.

Association of National Olympic Committees President Sheikh Ahmad, who will not attend the Session here this week, resigned from FIFA's ruling Council in April a day after being identified as a co-conspirator by the United States Department of Justice in the case involving Richard Lai, the FIFA Audit and Compliance Committee member banned for bribery.

It is hoped Ban's appointment will help improve the image of the IOC.

The election of Ban, who has developed an increasingly close relationship with Bach during the last three years, came before other members were appointed to the Ethics Commission.

This included IOC Athletes' Commission chairperson Angela Ruggiero and China's Hanqin Xue, a judge at the International Court of Justice, the principal judicial organ of the UN.

Switzerland's Samuel Schmid, head of one of the two IOC Commissions looking into the Russian doping scandal, and Robin Mitchell, expected to be elected to the Executive Board here on Saturday (September 16), were also elected.