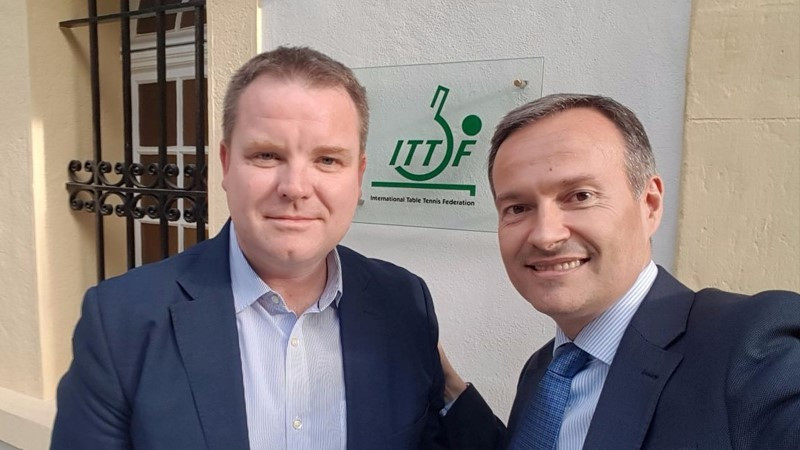 The International Table Tennis Federation (ITTF) has confirmed the appointments of its chief executive and secretary general.

Steve Dainton will take the former role on a permanent basis after serving as acting chief executive for the past two months.

Raul Calin, who had been working as the ITTF's director of operations, will now assist Dainton in the newly created secretary general position.

The 39-year-old Australian Dainton was initially hired in July after Hungary's Judit Farago was suspended.

A reason has yet been given for the suspension with suggestions her relationship with ITTF President Thomas Weikert broke down.

Farago has since sought legal advice.

"Both Steve and Raul have both been extremely loyal to the ITTF over their many years of service, and have been instrumental to the growth of the ITTF over recent years," said Weikert today.

"The ITTF Executive Committee and I have complete trust in both of them to excel in their new positions and guide the ITTF to a new fruitful era."

Dainton, who can speak and write Chinese, joined the ITTF in 2002 as Oceania's development officer.

He became a director in the ITTF Asia-Pacific office in Shanghai in 2005, remaining there for six years and playing a part in commercial deals with Volkswagen, China Unicom and others.

In 2011 he became the ITTF's marketing director and moved the Asia-Pacific office to Singapore.

More deals were signed with companies including GAC Group, Seamaster and GoDaddy, while Dainton also helped launch intiatives such as the ITTF Star Awards.

"It's an exciting new era for the ITTF and table tennis," said Dainton.

"It's the right time for the ITTF to realise its true commercial potential and modernise itself to ensure that table tennis cements itself as one of the leading sports globally at all levels.

"I am looking forward to helping to ensure this and to especially assist in growing the table tennis industry to new levels, meaning not only more people playing table tennis, but also more people actively engaged.

"If we get it right this will ensure the true stars, the athletes, will be better recognised and rewarded."

Calin, a 45-year-old Spaniard, joined the ITTF as competition manager in 2004.

He has helped to run the ITTF Global Junior Programme as well as the Rio 2016 Olympic tournament.

"I am looking to help build ITTF into a modern organisation, with transparency in all levels of management, with ambition and clear goals," Calin said.

"ITTF should look for excellence in all areas.

"An institution in which national associations interact actively with the ITTF management for the benefit of our athletes and fans. Let’s work towards excellence in our sport events, let’s have ambition, let’s make an ITTF everyone is proud of."

More changes to the ITTF professional structure will be announced in the coming months, the world governing body said.

Weikert defeated Jean-Michel Saive of Belgium to become ITTF President in May.

Farago has today written to several officials involved in table tennis informing them that she has officially left the ITTF.

She did not, however, give any reason for her departure.

insidethegames has contacted Farago and the ITTF for an update on her status.