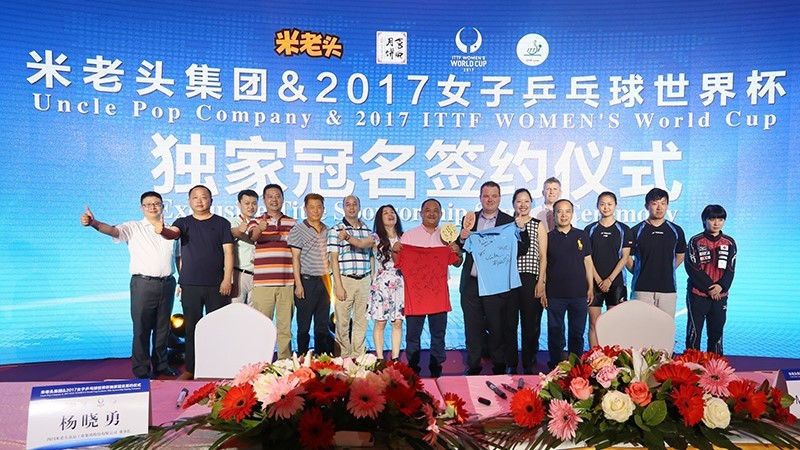 The event, due to run from October 27 to 29 in Markham, will now been known as the Uncle Pop 2017 ITTF Women's World Cup.

The agreement between the Chinese-based company, the worldwide governing body and Table Tennis Canada (TTC) was announced following signing ceremonies in Chengdu in China and in Toronto.

Defending champion Miu Hirano of Japan, who won a bronze medal at the 2017 World Championships in Düsseldorf, attended the event in Chengdu, along with acting chief executive Steve Dainton.

"Thank you to TTC for introducing Uncle Pop to ITTF events," Dainton, who was appointed to his current role in place of the suspended Judit Farago, said.

"We feel that Uncle Pop is a great fit as a partner for the ITTF Women’s World Cup and for future ITTF events.

"The ITTF is looking forward to working with both Uncle Pop and TTC to make this event one to remember.”

The competition in Markham is set to feature the top 20 women's players in the world.

A media report following last year's event in Philadelphia in the United States claimed over 45 million viewers tuned in to television coverage.

"We had a number of interests for the title sponsorship, but we chose Uncle Pop as the company’s plans to expand into North America while strengthening its base in Asia aligns with our plans for hosting high level international events in Canada," TTC chief executive Tony Kiesenhofer said.

"We can provide programming that is of interest to viewers in North America and in Asia, and this results in large TV audiences and great brand exposure for our sponsors.”

Hirano became the youngest winner of the event when she triumphed in the American city last year.

The then 16-year-old overcame Cheng I-Ching of Chinese Taipei to win the title.