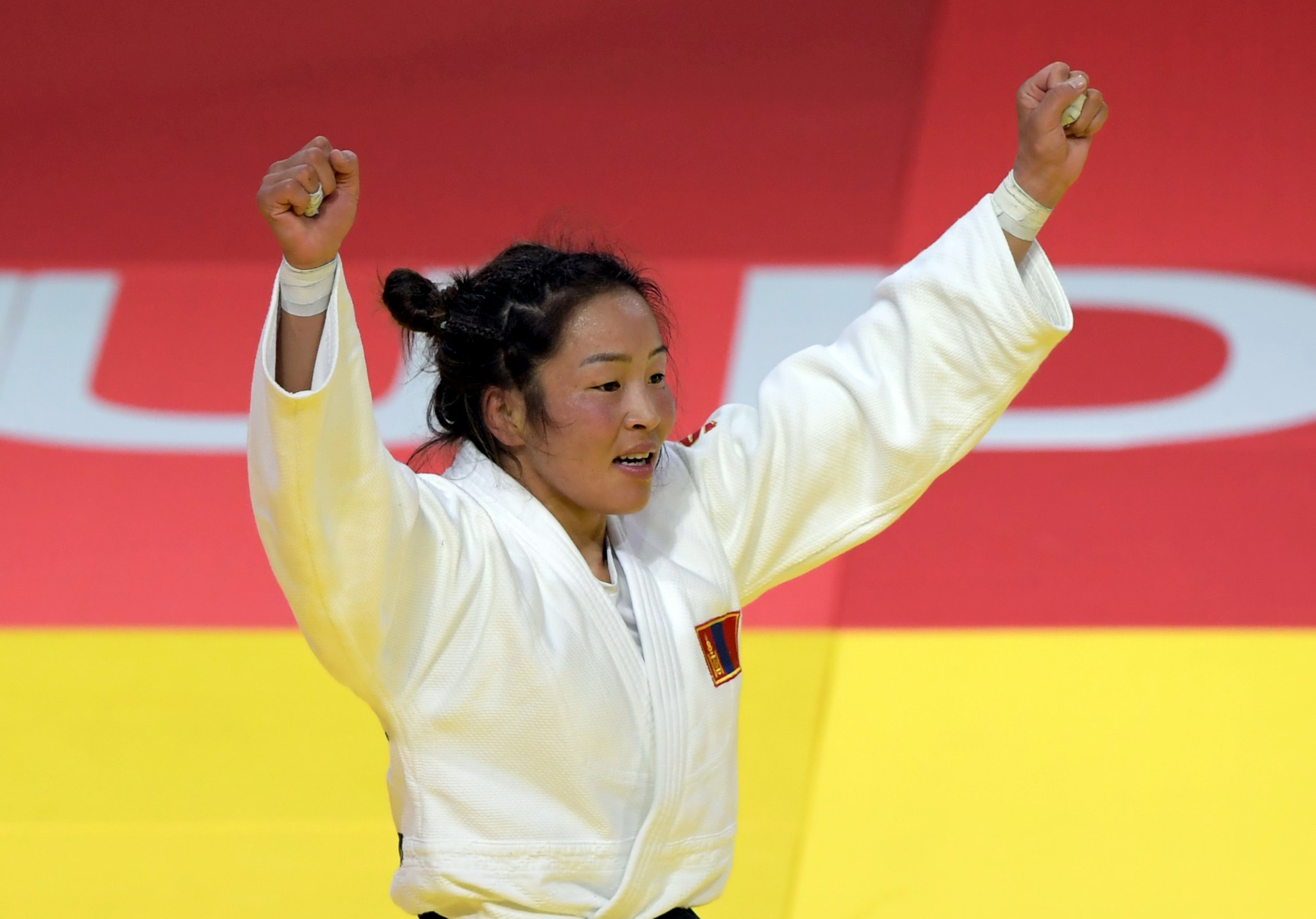 Dorjsuren denied Japan a fifth straight gold medal when she beat Tsukasa Yoshida in the golden score period in an epic under 57 kilograms final, which lasted four seconds shy of 13 minutes.

The triumph for Dorjsuren came in front of watching Mongolian President Khaltmaa Battulga, also head of his country's Judo Federation and who was again in attendance on this third day of competition.

Hashimoto continued his remarkable unbeaten streak, which stretches back to 2015, as he ensured his country returned to the top of the podium - where they have spent the majority of the Championships so far - by defeating Olympic silver medallist Rustam Orujov of Azerbaijan.

The 26-year-old, nicknamed the "ippon hunter", also needed golden score to clinch the title as he found a way past Orujov's defences.

His success means Japan have clinched five of the six gold medals on offer so far at the event.

A dramatic day began with a shock defeat for Olympic champion and Rio 2016 star Rafaela Silva, who exited the under 57kg tournament at the second round stage.

She suffered a 1-0 reverse at the hands of Portugal's Telma Monteiro.

Silva came into the World Championships as the judoka to beat and was expected to be challenging for the title.

Her surprise defeat opened the door for the rest of the competition and Dorjsuren took full advantage on her way to claiming her first world title.

The 26-year-old had earned bronze and silver medals at previous editions of the World Championships but had never taken gold.

Dorjsuren changed that record with a battling win in a gruelling contest with Yoshida in the gold medal match.

The Mongolian nor the Japanese were not able to register a point in the regulation four-minute period and the encounter went to golden score.

As the seconds and then minutes continually ticked by, still there was no score until Dorjsuren landed a waza-ari in the 13th minute to bring a lengthy duel to an end.

"We are here to get the gold medal.

"Today is a great day for Mongolia!"

Helene Receveaux of France sealed the first bronze medal in the division as she beat five-time European champion Monteiro, who could not replicate the form that saw her knock out the Olympic champion.

Britain's Nekoda Smythe-Davis then joined her on the podium with a 2-0 win over Panama's Miryam Roper, who switched from Germany to compete for them earlier this year.

Hashimoto had not been on the losing side for two years but produced inconsistent displays during the preliminary rounds.

The Japanese star was at his best when it mattered, however, winning his semi-final against Azerbaijan's Hidayat Haydarov by ippon to set up a meeting with Orujov in the final.

The gold medal bout followed a similar pattern to the preceding under 57kg encounter and proved to be a tense affair.

After no scores were recorded in regulation time, Hashimoto finally struck in the golden score period to take the title and extend his winning run to 31 matches.

An Chang-rim of South Korea overcame Lasha Shavdatuashvili of Georgia, the London 2012 champion, to secure the first bronze medal on offer in the category.

Odbayar Ganbaatar then added to the Mongolian haul by beating Heydarov in the other bronze medal contest.

The World Championships are due resume tomorrow with action in the men's under 81kg and women's under 63kg events.

Rio 2016 champion Khasan Khalmurzaev of Russia will make his World Championships debut and is among those tipped for glory at under 81kg, along with Olympic bronze medallist and defending world champion Takanori Nagase of Japan.

Tina Trstenjak of Slovenia, the reigning Olympic gold medallist, will aim to defend her under 63kg title.