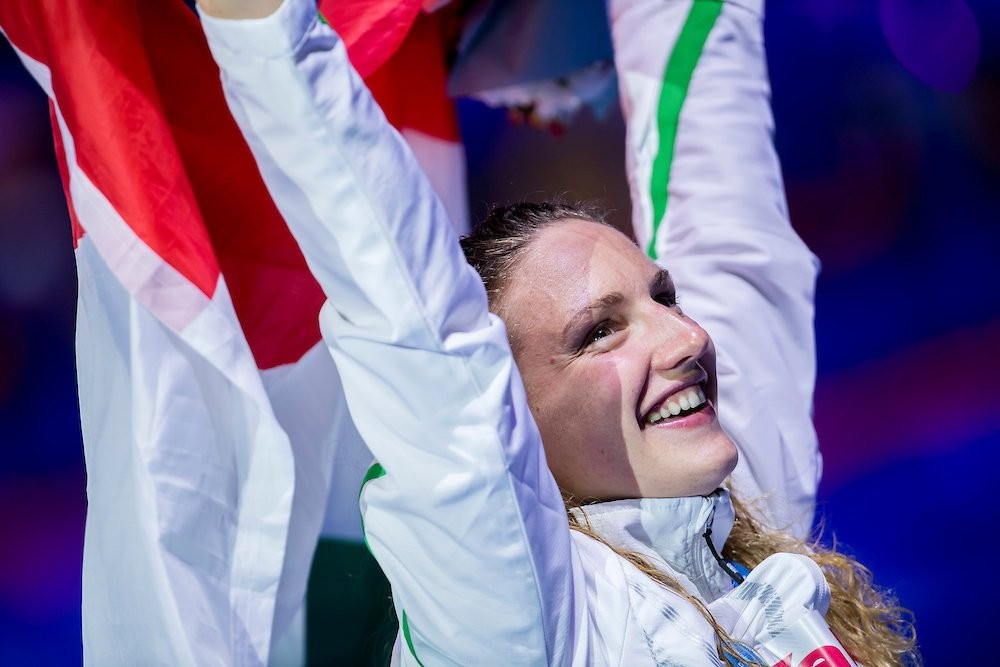 She set a world record of 56.51sec in the 100m individual medley final to win the first race of the day at the Europa Sportpark.

Sweden's Sarah Sjostrom followed her onto the podium in 57.30, while Alia Atkinson of Jamaica completed the top three in 58.12.

Hosszú's dominance extended to the women's 200m backstroke where she touched the wall in 2min 00.37sec to record her third gold medal in the German capital.

Australia's Emily Seebohm finished narrowly behind in second in 2:00.65.

Hosszú sealed a fourth and final title for the meet in the women's 100m butterfly.

She finished over half a second quicker than her nearest rival in 55.86 with Italy's Ilaria Bianchi having to settle for silver in 56.42.

Belgium's Kimberly Buys rounded out the top three with her time of 56.44.

Records continued to tumble, though, as The Netherlands' Ranomi Kromowidjojo set a world best in the women's 50m freestyle final.

The three-time Olympic champion touched the wall in 22.93 with Sjostrom claiming her second silver of the day in 23.00.

Atkinson managed to take one gold medal this evening as her time of 1:03.16 saw her win gold in the women's 100m breaststroke.

Finland's Jenna Laukkanen took the silver medal in 1:04.56 and Belgium's Fanny Lecluyse the bronze in 1:05.81.

Tom Shields of the United States finished in second in 1:49.26, just in front of Japan's Masayuki Umemoto, who swam 1:52.80 for third.

Le Clos had to settle for bronze in the men's 200m freestyle as Hungary's Dominik Kozma took the gold medal in 1:41.03.

There was further success for South Africa in the men's 50m breaststroke, however, as Cameron Van Der Burgh took the gold medal in 25.49.

Japan's Masaki Kaneko won the silver medal in 50.29 and Belarus' Pavel Sankovich the bronze in 50.70.

There was delight for the host nation in the men's 400m individual medley as Philip Marvin Heintz touched the wall first in 4:05.16.

Federico Turrini of Italy took second in 4:05.73 and the bronze went to Ayrton Sweeney of South Africa in 4:06.72.