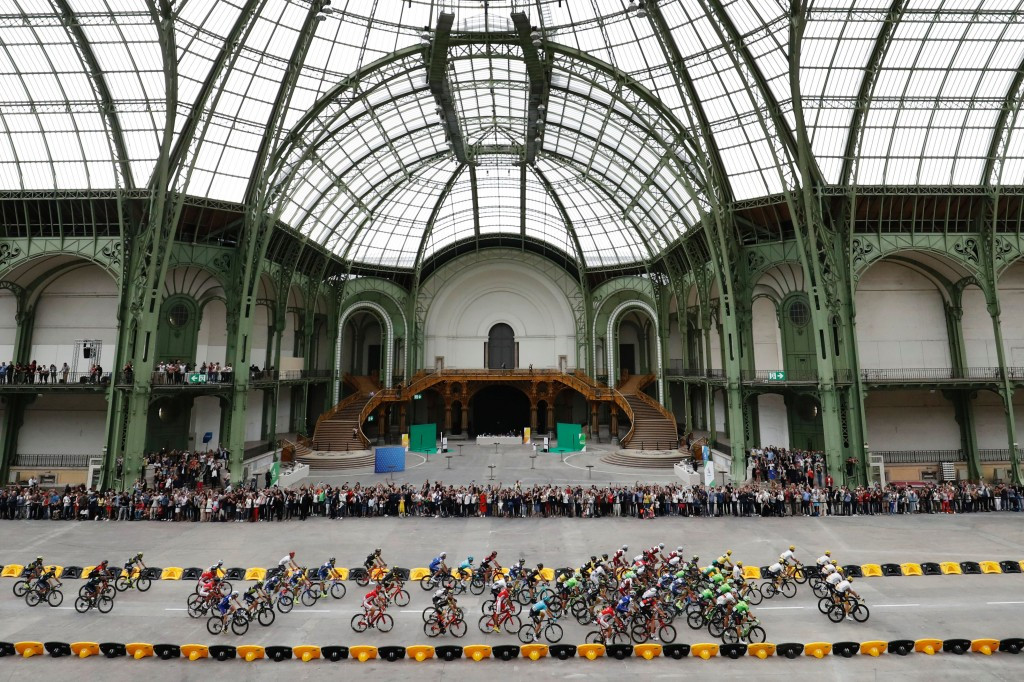 Paris 2024 co-chairman Tony Estanguet believes events arranged to celebrate the final stage of the 2017 Tour de France highlighted the French capital's ability to work in unison with major organisers and boost the role of women in sport.

Upon entering the French capital on the 103 kilometre final stage yesterday, the peloton passed through the Grand Palais for the first time in the Tour's history.

A digital depiction of athletics and swimming lanes was displayed to television viewers, as part of a bid to promote Paris' candidacy for the Olympic and Paralympic Games to a global audience.

Paris 2024 also enjoyed exposure during the podium presentations, with Estanguet among the delegation which presented Britain's Chris Froome with the winner's yellow jersey.

Estanguet believes Paris 2024's work with major organisers has highlighted the support for the bid among the French sports movement.

He also claimed that the large crowds present were evidence of a determined local population who will not let security fears affect their daily lives.

"At the beginning of the bid we wanted to work with all major organisers and the Tour de France is one of them, we worked with Roland Garros before," Estanguet told insidethegames.

"The Tour de France is of course one of the best events we organise every year in France and French people love the Tour de France, because it is the best combination of the high level of sport and everyone as it is a free show.

"People come from everywhere to celebrate and have a strong experience.

"It was a unique opportunity to work with ASO and for them to show their support to the Paris bid, they accepted to come through the Grand Palais, an Olympic venue for 2024 for fencing and taekwondo.

"It is really important for us to continue to work with the organisers of major events.

"People are criticising our security, but when you see the people on the streets, they want to continue to live and really support sport.

"They want to feel emotions and they understand the power of sport and want it in their lives.

"It was really important for us to show the message that French people love sport."

In conjunction with French lottery and betting company Française des Jeux, who sponsor one of the competing teams at the Tour de France, a specially arranged women's event took place prior to the final stage of the race.

The event featured 2,024 female riders with the course taking in the eight kilometre finishing circuit around the Champs-Elysées.

"We had a special event with Française des Jeux, our partner, to try to develop the sport for women," said Estanguet.

"We had a big success there and it is the first step of building a strong legacy, because in this country and internationally we know there is a margin to improve the participation of women in sport.

"With action like this, to give them the same access to sport, the prestige and chance to ride the same circuit at the Tour de France, it sends a very strong message."

The French capital is expected to host an edition of the Olympics and Paralympics within the next 11 years.

It follows the approval of plans to jointly award both the 2024 and 2028 Olympics by the International Olympic Committee (IOC) early this month at their Extraordinary Session in Lausanne.

Discussions are currently taking place between Paris, their sole challenger Los Angeles and the IOC on which city should host either Games.

Paris is currently viewed as the favourite to host 2024, with Los Angeles expected to follow in 2028.

A decision is yet to be reached, with the possibility of a single award still remaining an option for the IOC at their Session on September 13.

Estanguet said that discussions were progressing in a positive fashion, but he was tight-lipped when asked if an agreement could be revealed in the coming days.

"Whatever the situation, we want to be a partner of the Olympic family," the three-time Olympic canoe slalom gold medallist said.

"We are ready to go to Lima and this is the next stage for us, we do not exactly know the format of the presentations but we are in contact with the IOC.

"We look to prepare for Lima in the right conditions and we want to know the format of the presentations.

"Everything is in favour at the moment, there is a good atmosphere to be a partner with the IOC and Los Angeles, but we do not know yet what will be the end of this agreement.

"We have to continue, but whatever the situation will be, I want to be in a position to win.

"If it is a single award, if it is a double award, we have to be ready to win.

"It is the mandate I received two years ago and we remain focused on this."