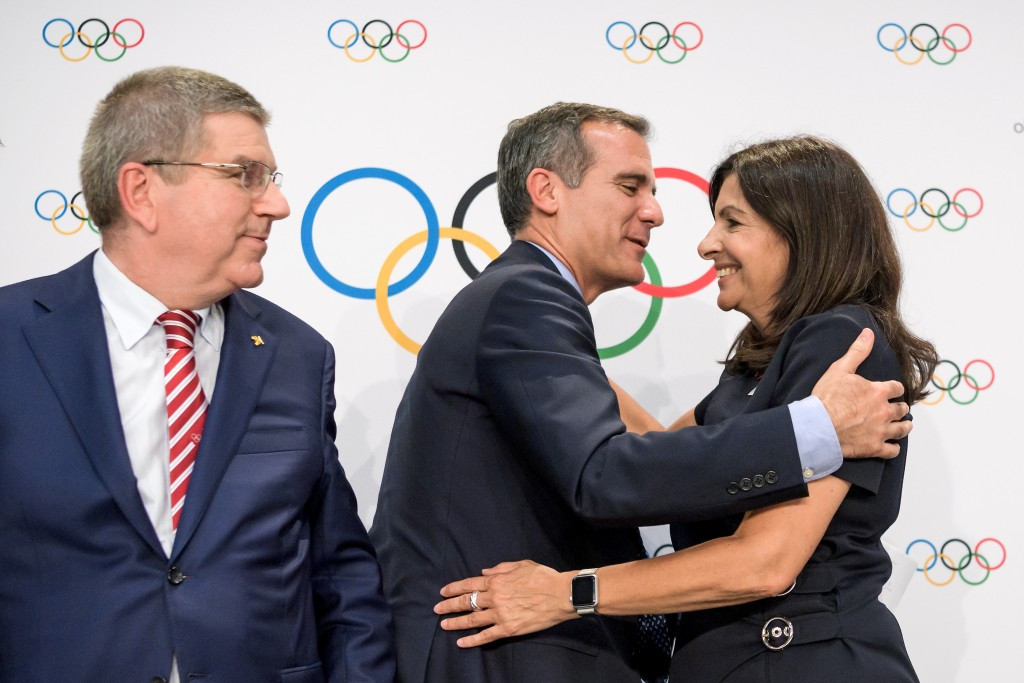 "Informal talks" have already taken place between International Olympic Committee (IOC) President Thomas Bach and the Mayors of Los Angeles and Paris as they seek a "tripartite agreement" on who should host the 2024 and 2028 Games.

It follows yesterday's unanimous approval by IOC members of plans to award both editions at the Session in Lima on September 13.

The IOC now claim to be working with both the Californian city and the French capital to reach a proposal over who should host which event.

Representatives from all three parties have privately made clear that this is expected to end with Paris hosting in 2024 before Los Angeles holds the 2028 edition.

In public, though, the three still claim that nothing has been decided.

"We had some informal talks yesterday over dinner already and had a very brief informal talk this morning," said Bach following a visit to both candidate's bid booths here today.

"We will now make contact with the bid leaders and see then how we can best arrive at this tripartite agreement.

"This formal procedure will start tomorrow or the day after tomorrow.

"We want to have this ready right in time for Lima.

"We don't want to arrive in Lima and have uncertainty.

"After the reaction I had from the two Mayors, I am pretty optimistic.

"The negotiations will now start at the level of the IOC administration, bid leaders and Executive Board."

Bach claimed that the joint awarding plans have ensured a "unifying factor" as well as "stability".

"These are the two things the world is lacking now," the German added.

When asked about the many rumours around Paris for 2024, he answered: "People say many things".

"We will make sure both cities are treated on an equal level," he added.

An August time-frame is considered most likely for a proposal to be announced.

Eric Garcetti and Anne Hidalgo, the respective Mayors of Los Angeles and Paris, have been similarly restrained with their public messages.

Garcetti focused on "celebrating a golden moment for LA and Paris - and the Olympic Movement", posting on Twitter alongside a picture of him greeting French President Emmanuel Macron.

Hidalgo has posted around 20 messages or re-tweets on Twitter heralding yesterday's decision.

This included re-tweeting several French media reports about how Paris is still only focusing on 2024.

She also revealed that Macron had discussed France supporting the Olympic refugees programme during his visit here earlier this week.

Happy to celebrate a golden moment for L.A. and Paris — and the Olympic Movement with President Macron and Mayor Hidalgo. pic.twitter.com/oWKoz02CDF

United States President Donald Trump also tweeted yesterday about bringing the Olympics to Los Angeles, although he tellingly did not specify which year.

"Working hard to get the Olympics for the United States (L.A.). Stay tuned!" he posted.

Media in both potential host nations have focused on the negotiations rather than the end result.

The Los Angeles Times speculates whether the American bid will stand firm with plans, mooted by Garcetti, to request youth sports funding in California in return for hosting the later event.

Bach has publicly claimed they will offer no such concessions.

An article in L'Equipe asks whether Paris is nailed-on for 2024 although, in a separate piece, editor Jérôme Cazadieu describes yesterday's decision as a just a "half victory" for the city before questioning whether Los Angeles has completely abandoned plans to host the earlier event.

Most other French media, however, describe the 2024 awarding as a done deal.

"Paris almost certain of having the Games" was the lead in Les Echos while La Croix chose the headline "Olympic Games, the flame en-route to Paris".

Regional newspaper La Charente Libre did warn about the impact of hosting the Olympics, pointing out the cost of previous editions such as Athens 2004 on taxpayers.