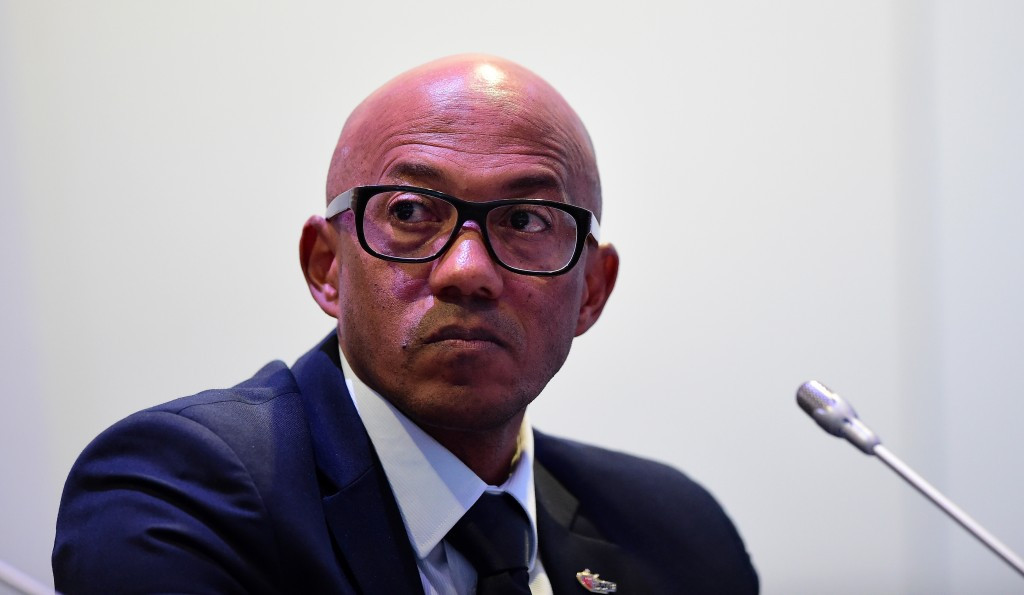 International Association of Athletics Federations (IAAF) Council member Frank Fredericks has been provisionally suspended over a potential breach of the organisation's Code of Ethics.

Michael Beloff, chairman of the IAAF Disciplinary Tribunal, imposed the suspension on the Namibian following an application made by the Athletics Integrity Unit (AIU).

The investigation related to payments received by Fredericks' company, Yemi Limited, from a company owned and controlled by Papa Massata Diack.

He temporarily stepped down from his role as a Council member in March but the IAAF have now confirmed a provisional suspension.

A parallel IOC Ethics Commission investigation is also looking into the payments to the company, linked to the four-time Olympic silver medallist.

The 49-year-old former sprinter has denied any wrongdoing.

The IAAF Disciplinary Tribunal have placed Sir Anthony Hooper, a former judge at the English Court of Appeal and an experienced investigator in the context of sports integrity, in charge of the investigation.

The AIU said the provisional suspension is not an early indication of guilt or innocence, with Fredericks enjoying the presumption of innocence until the conclusion of the investigative process.

"As an IOC member, Mr Fredericks was one of the persons entitled to vote to award the 2016 Olympics," an AIU statement said.

"Mr Fredericks has stated that the sums of money received were proper payments for services rendered which have no connection to the voting process for the award of the 2016 Olympic Games.

"Since assuming responsibility for this investigation, the Athletics Integrity Unit has carefully considered the case, including reviewing the facts and documents leading to the initiation of an IOC Ethics Investigation, as well as certain limited additional information.

"Despite Mr Fredericks’ voluntary resignation from his positions on, inter alia, the IAAF’s Russia Task Force, the Athletics Integrity Unit determined that the interests of the sport required an application to be made for an order to provisionally suspend Mr Fredericks from all his present roles in the sport, including his important duties as an IAAF Council Member.

"The allegation is a serious one and requires careful investigation and the Athletics Integrity Unit concluded, and the Chairman of the Disciplinary Tribunal agreed, that the nature of the allegations and the seniority of Mr Fredericks within the sport required an order for provisional suspension."

The AIU said that Fredericks has indicated that he intends to contest the suspension at a provisional hearing before a panel of the IAAF Disciplinary Tribunal convened to hear his case.

Fredericks has claimed the payment was legitimate and related to his role in the promotion of several athletics events, while he confirmed his intention for appeal the provisional suspension.

"On the 14th of March 2017, IAAF Council member Frank Fredericks made a statement to the IAAF Ethics Commission," a statement read.

"The statement was forwarded to the Athlete Integrity Unit (AIU) when that body was subsequently established.

"Regrettably the AIU did not make any further enquiries of Mr Fredericks, as they could have done in accordance with the provisions of the IAAF Integrity Unit Reporting, Investigation and Prosecution Rules, which allows the Head of the Integrity Unit to ask any person filing a statement to provide further information but rather referred the statement to the Chairman of the IAAF Disciplinary Tribunal for a decision.

"The decision quotes verbatim from the Notice of the Prima Facie Case issued by the AIU, and was issued on the same date.

"The decision dwells on the origination of payments from an entity related to Diack, and the fact that the latter is currently under investigation.

"This fact was not known to Mr Frank Fredericks at the time of contracting and dealing with this person in the period from 2007 to 2011, at which time Diack was also not under investigation and furthermore served as a high-ranking official within the IAAF.

"The AIU evaluation and the decision do not deal with the explanations provided by Mr Fredericks in his statement and contain specific inaccuracies.

"On the 2nd of June Mr Fredericks already informed the AIU that he would not attend the next IAAF Council Meeting so as to afford the IAAF ample opportunity to undertake whatever investigations they would deem appropriate."

Fredericks stated he "looks forward to the final outcome of the matter to enable him to put this saga behind him for good".

He stepped down as the chair of the IOC Evaluation Commission for the 2024 Olympic and Paralympic Games following the accusations.

Papa Massata Diack is the the son of Senegal's former IAAF President Lamine Diack, the alleged key powerbroker who influenced the votes of others when the 2016 Olympic and Paralympic host city.

Rio de Janeiro was subsequently awarded the Games over Madrid, Tokyo and Chicago at the IOC Session in Copenhagen on October 2, in 2009.