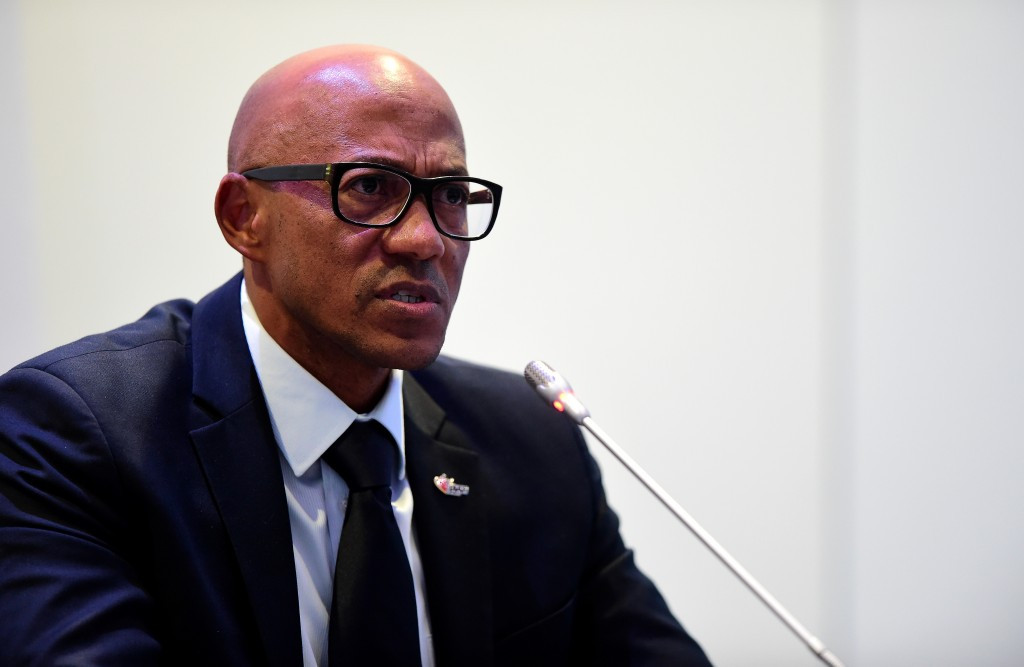 Frankie Fredericks has stepped down as the chairman of the International Olympic Committee's (IOC) Evaluation Commission for the 2024 Olympic and Paralympic Games and has been replaced by Switzerland's Patrick Baumann after an investigation into suspicious payments he received was launched.

The Namibian, a four-time Olympic silver medallist in the 100 and 200 metres at Barcelona 1992 and Atlanta 1996, claimed his decision was made in the "best interests".

Baumann, secretary general of the International Basketball Federation and President of SportAccord, has been confirmed as the new chairman in a statement by the IOC this afternoon.

He was already a member of the IOC Evaluation Commission appointed in February 2016.

The IOC Ethics Commission is investigating payments a company linked to Fredericks allegedly received three days before Rio de Janeiro was awarded the 2016 OIympic and Paralympic Games in 2009.

The 49-year-old denies any wrongdoing and will also relinquish his role as chairman of the Coordination Commission for the 2018 Summer Youth Olympic Games in Buenos Aires.

He has also said that he will not vote for which city should host the 2024 Olympic and Paralympic Games when the IOC votes at its Session in Lima on September 13.

Los Angeles and Paris are the two remaining bidders.

The 2024 Evaluation Commission is set to make its first visit to Los Angeles between April 23 and 25.

"I have personally decided that it is in the best interests of a good functioning of the IOC Candidature process that I step aside as chairperson of the 2024 Evaluation Commission, because it is essential that the important work my colleagues are doing is seen as being carried out in a truthful and fair manner," Fredericks said in a statement sent to insidethegames.

"Paris and Los Angeles are presenting two fantastic candidatures and I do not wish to become a distraction from this great contest.

"I will not attend the IOC city meetings in July and will not participate during the vote for the 2024 city.

"I also temporarily step aside as the chair of the Youth Olympic Games 2018 coordination.

"In the interim, I will continue to fully cooperate with the IOC Ethics and Compliace Commission as I trust that they will act in the best interests of all concerned and promptly conclude that the reports and insinuations contained in the aforementioned articles are defamatory in character."

According to Le Monde, French police are probing a company linked to an influential Brazilian businessman which reportedly paid $1.5 million (£1.2 million/€1.4 million) to a firm set-up by Papa Massata Diack, the son of Senegal's former IAAF President Lamine Diack.

This allegedly took place shortly before Rio de Janeiro was chosen as the 2016 Olympic and Paralympic host at the 2009 IOC Session in Copenhagen on October 2.

Yemli Limited is linked to Fredericks.

The IOC Ethics Commission launched an investigation after the allegations were published last Friday (March 3).

Fredericks was chair of the IOC Athletes' Commission between 2008 and 2012 and served as a scrutineer during the vote won by Rio 2016.

He claims the timing in 2009 was purely coincidental.

"I categorically deny any direct or indirect involvement in any untoward conduct and confirm that I have never breached any law, regulation or rule of ethics in respect of any IOC election process," added Fredericks.

"The articles do not only target me, they target the integrity of the IOC bidding and elections process for host cities altogether.

"Of course all election processes should be seen to be free and fair.

"This is why I have been and am still actively cooperating with the IOC Ethics and Compliance Commission in order for them to conduct a proper and independent investigation."

Fredericks was replaced on the IAAF Taskforce by Rožle Prezelj, chairman of the world governing body's Athletes' Commission.

I believe as Frankie Fredericks has admitted taking money from Papa Diack he has no choice but to step down from IAAF Council permanently https://t.co/DAIb8ZtJ27

Bulgaria's Dobromir Karamarinov has become the first senior athletics official to call for Fredericks to resign from the IAAF's ruling Council, which the Namibian also sits on.

"I believe as Frankie Fredericks has admitted taking money from Papa Diack he has no choice but to step down from IAAF Council permanently," Karamarinov, the first vice-president of European Athletics, tweeted.

The full recommendation of the IOC Ethics Commission can be found here.

"In line with the recommendation of the IOC Ethics Commission, the IOC Executive Board accepts his resignation from the Evaluation Commission for the Olympic Games 2024," read an IOC statement.

"In line with the IOC Ethics Commission, the IOC Executive Board recalls the importance of respecting the principle of the presumption of innocence.

"It also notes Mr Fredericks’ categorical rejection of the allegations made against him."

Paris 2024 have claimed that their bid "looks forward" to the IOC Evaluation Commission visiting the French capital in May under Baumann.

"It would not be appropriate to comment on this matter while it is currently under investigation by the IOC and other relevant authorities," said a Paris 2024 spokesperson.

"Paris 2024 looks forward to working with the IOC Evaluation Commission and its new chairman Patrick Baumann when they visit Paris in May."

"LA 2024 is preparing to welcome the IOC Evaluation Commission to the City of Angels," a spokesman told insidethegames.

"With new chairman Patrick Baumann, we remain confident that the 2024 Candidature process will continue to be conducted in a collaborative, efficient and transparent manner."