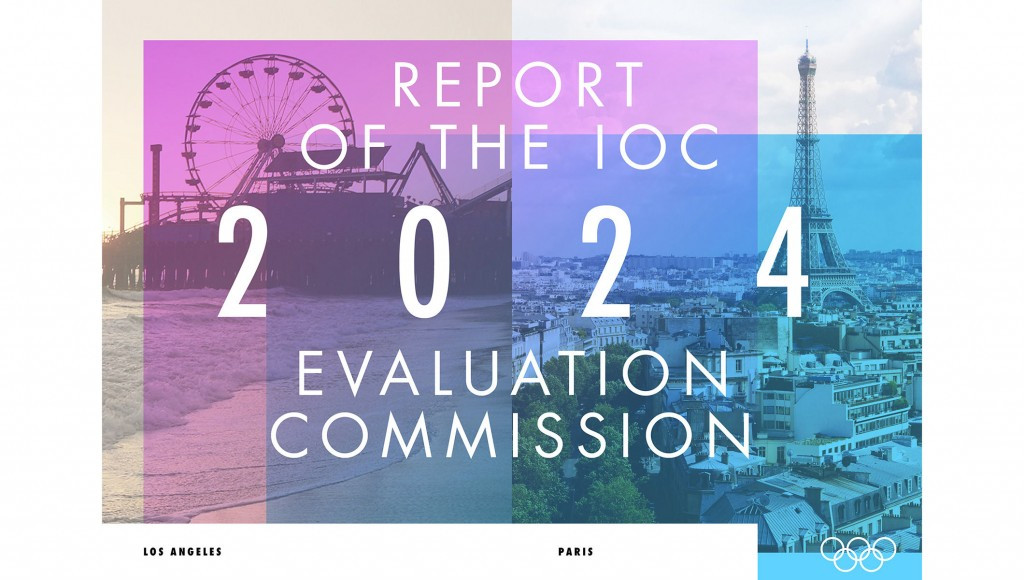 Los Angeles and Paris have each been widely praised by the International Olympic Committee (IOC) Evaluation Commission in their report on their bids for the 2024 Olympic and Paralympics published today, although some challenges do remain for each city.

But, according to a survey conducted in February by the IOC, Los Angeles has public support of 78 per cent in the city, 72 per cent in California and 64 per cent across the United States.

Paris recorded levels of 63 per cent in both the city and France.

It was also found that 23 per cent of Parisian respondents oppose the bid in comparison to just eight per cent in Los Angeles.

This compared with 15 per cent opposition across France and just five per cent across the US.

It surveyed a total of 1,800 adults across both France and the US between February 6 and 19 this year, consisting of 600 in the respective Candidate City itself along with another 600 in the "Candidate City region" and 600 living elsewhere in the country.

A public opinion poll commissioned by the IOC found levels of 85 per cent support in the capital city itself and 79 per cent across France in 2005 when Paris bid unsuccessfully for the 2012 Olympic and Paralympic Games.

Los Angeles is warned about the importance of the "successful implementation" of a Games transport strategy, including the Olympic Route Network if the Games is to be pulled-off well.

Concerns are also raised with the "extensive planned upgrades" at the existing velodrome to remove inside pillars and increase seating capacity.

These would require "further discussions" between all relevant parties.

The French capital were warned that plans to hold triathlon and open water swimming competitions in the River Seine are dependent upon the success of planned methods to reduce water pollution there.

They are also encouraged to consider scrapping a planned second venue for volleyball as it "does not seem necessary".

The report does not consider the suitability of either for hosting the 2028 Olympic and Paralympic Games.

Los Angeles' proposed security measures for 2024 would reduce the risk level in Olympic venues to "very low", in comparison with "low" for the Olympic route network and "low" or "very low" for the public domain.

Paris' is also defined as "very low" in Olympic venues and "low" on the Olympic route network, although it was "medium" in the public domain.

Paris' budget is described as "feasible", with the financial risk "reasonably low for this stage of planning and budget development".

Los Angeles' budget is also seen as low risk, although it is made clear that some "venue-use agreements are based on revenue or cost-recovery arrangements, where the amount payable is not fixed, creating some financial and operational risk to the OCOG (Organising Committee)".

This is somewhat mitigated, however, by the availability of other existing venues.

There has been no confirmed investment plans unveiled yet for the International Broadcasting Centre.

Paris' proposed new site at Saint-Denis would meet "all athlete needs and provide an exceptional experience, with spacious accommodation, great dining options and a relaxing atmosphere".

The use of barges on the River Seine was particularly praised.

It is highlighted how land acquisition from private owners is incomplete, though, with 30 per cent of land still to be acquired, before it is pointed out that "public authorities are empowered to acquire it under an accelerated process".

Los Angeles' plans to use an existing facility at the UCLA campus, meanwhile, was "outstanding in all aspects and very low risk from an operational standpoint".

It is pointed out, though, that ""certain areas within the Paralympic Village would be difficult for wheelchair users due to steep gradients".

In general, there seem to be more concerns with Los Angeles' Paralympic plans.

It is also pointed out that the "awareness of Paralympic sport in the US needs to be further developed".

Paris, in comparison, are warned that the "proposed timing of the [Paralympic] Games after school holidays would increase traffic, putting pressure on the Games’ transport operations".

The report was split into three parts.

For the first time, it began with a 15 minute video describing the "value proposition of the two candidatures and highlights key features of each proposal".

This was followed by traditional written assessments based on the four themes of "Games Concept, Games Experience, Sustainability and Legacy and Games Delivery".

Technical documents, including photographs and key information on proposed venues, were also included.

"Members of the Evaluation Commission have used the terms ‘forward-looking’, ‘innovative’, ‘vibrant’, and ‘cool’ to describe the Los Angeles candidature, and ‘historical’, ‘cultural’, ‘iconic’ and ‘amazing backdrops’ for that of Paris,” said IOC Evaluation Commission chair Patrick Baumann.

"However, whatever the description, it truly is a tale of two great Olympic cities.

"The two projects are different in nature, but each city presents a proposal which is genuinely authentic and reflects the best of what each has to offer."

IOC Evaluation Commission members will now present their findings to the IOC membership at large during a Candidate City Briefing held in Lausanne on July 11 and 12.

An Extraordinary IOC Session will then be held at which the members are expected to rubber-stamp plans to award both the 2024 and 2028 Olympics together this year.

This would then happen at the IOC Session in Lima on September 13.

Bid leaders from both cities claimed to be delighted with the findings of the report.

“We are absolutely delighted that the IOC’s report highlights that Paris would be an excellent host of the 2024 Games and is ready to deliver a wonderful celebration of Olympic sport with real and meaningful legacy," said Paris 2024 co-bid leader Tony Estanguet.

"We are honoured that Paris’ compact, city-centre Games Plan received extensive praise and that recognition was given to our public engagement programmes and plans to promote the values and the spirit of the Olympic Movement, particularly among young people.

"We are particularly pleased that the IOC recognised that this is an athlete-focused plan and that all athletes, media, and spectators will have a great Games experience in Paris 2024.

LA 2024 chairman Casey Wasserman added: “LA 2024 set out to redefine Olympic sustainability, guided by the IOC’s Olympic Agenda 2020 reforms, and we are delighted that our efforts have resonated so clearly with the IOC Evaluation Commission.

"We are grateful to Evaluation Commission Chairman Patrick Baumann and his colleagues for their comprehensive, insightful appraisal of our bid.

“With no permanent venues to build and overwhelming public support, LA 2024 can concentrate on putting the best assets of the top global sports and entertainment market to work for the Olympic and Paralympic Movements.

"We think that makes Los Angeles an ideal Olympic city and an ideal partner for the IOC right now.”

The full IOC Evaluation Commission report can be read here