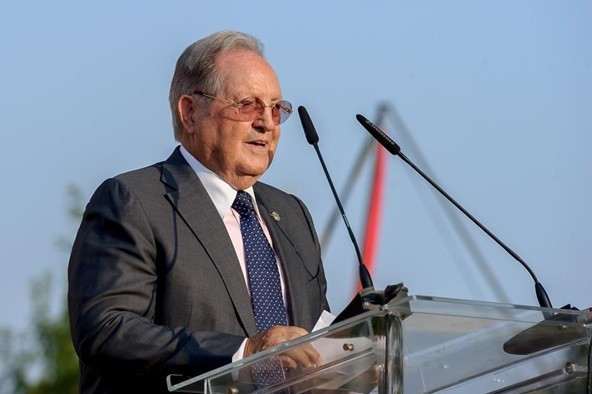 International Shooting Sport Federation (ISSF) President Olegario Vázquez Raña has warned it would be "almost impossible" for some of the events axed from the Tokyo 2020 Olympic programme to be reinstated for future editions of the Games.

Vázquez Raña was speaking after members of the ISSF approved the establishment of a forum, comprised of key stakeholders within the sport such as coaches, Member Federations and athletes, to look into possible changes to the sport's Olympic programme beyond Tokyo 2020.

One of the key tasks of the group, set-up at at today's Extraordinary General Assembly (EGA) here, will be to assess whether the events which have been cut from Tokyo 2020 can return, possibly as early as 2024.

The International Olympic Committee (IOC) officially gave the green light to the ISSF's proposal, which meets its gender equality requirements, at its Executive Board meeting in Lausanne on June 9.

Vázquez Raña, the head of the ISSF since 1980, told insidethegames that he believes the double trap may struggle to regain its place.

The 82-year-old Mexican cited costs and a lack of participation among women as a key reason why he believes Rio 2016 may have been the last Olympic Games to have double trap on the programme.

He also claimed it would be difficult for 50m pistol but admitted they could all return if the Member Federations promote the disciplines among women.

"I want to be perfectly honest, it is almost impossible for double trap to come back," he said.

"It is very expensive, it is double the price of everything you have to buy.

"Women don't shoot it because it is very heavy on the shoulders.

"For the last 15 or 20 years, there are almost no women who shoot double trap.

"Now we have the policy of the IOC - if there's no gender equality, you are not going to have a competition.

"The 50m pistol is also a really good event but again there is not a single woman that shoots it.

"So if we are going to continue the trend of gender equality it is impossible for those to come back unless they bring up their numbers.

"Prone shooting could come back - there are women that shoot that.

"Maybe 10 or 15 women in the entire world but if the Federations were to promote it, it could happen."

The changes to the Tokyo 2020 programme have not been universally popular, with the opposition led by ISSF vice-president Luciano Rossi.

Today's EGA here was called to discuss the reasons behind the alterations and to provide an explanation to the ISSF's wider-membership.

A number of interventions were made by members from the floor, sparking lively discussion.

Criticisms were voiced by several officials but the decision to cut the three events was ultimately given unanimous approval by applause.

It came after a series of presentations were given, including by Technical Committee chairman Jörg Brokamp, who also sits on the Executive Committee.

Men's and women's 10m air rifle and air pistol all ranked in the top four.

The members were more united in their support of the creation of the forum, which will be given the power to make recommendations about the composition of the shooting programme at future Olympic Games.

"It was done because we are aware that every four years they are going to be re-evaulating all the events and events will be changed," Vázquez Raña added.

"Over a month ago, we spoke about creating a forum presided over by the Athletes' Committee chairman because we said we needed something for 2024.

"After 2020, we are going to receive feedback and next year we want people from the Federations, coaches and athletes to get together.

"We want to hear their input and see what comes out of all of this that we can use."