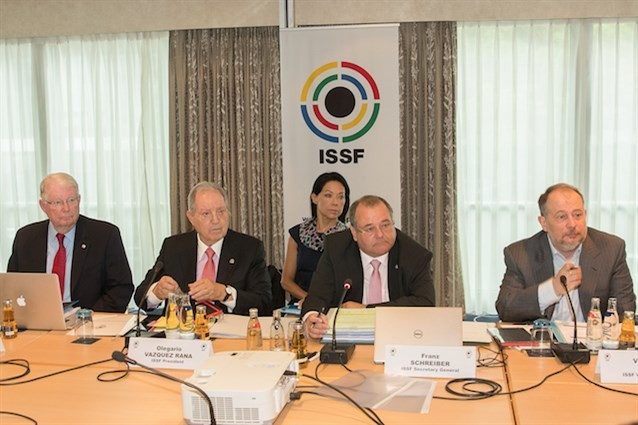 The International Shooting Sport Federation's (ISSF) Executive Committee convened in Munich as debate over changes to the Olympic programme continues.

Key officials met to discuss the governing body's Extraordinary General Assembly (EGA), due to be held in the German city on June 25.

Only one item will be on the agenda at the EGA - the proposed changes to the sport's Olympic programme at Tokyo 2020.

In order to meet International Olympic Committee (IOC) wishes for gender equality, the ISSF has proposed removing three events for men only from the schedule.

The plan has not been universally popular.

The ISSF Executive Board meeting was called to discuss administrative matters related to the organisation of the EGA.

There were 12 out of 13 members were present - with China's vice-president Wang Yifu the only absentee.

The ISSF also continued discussions on the matter today by holding a Summit with stakeholders from the shooting industry.

This event was seen as a chance for the ISSF to further explain the proposed changes, which the governing body has described as "innovative amendments".

"We are ready to welcome our 159 member federations in Munich, and we are going through all the necessary preparations."

The IOC are due to rule on events for Tokyo 2020 at its Executive Board meeting in Lausanne on Friday (June 9).

"Even if the IOC retains the final decision on the Tokyo 2020 Olympic programme, we believe the EGA will be a great occasion to further explain our innovative proposal and to listen to our Member Federations," Vàzquez Raña added.

"This is part of an extensive process that involved all our stakeholders.

"Shooting is one of the founding sports of the modern Olympic Movement.

"At the same time, our events have always been evolving, with the introduction of electronic scoring, finals, and new competition formats.

"The Olympic programme has also evolved through the years.

"We know that change is never easy, but we have to keep on adapting to be as relevant as possible to modern audiences, to share our values with youth and to develop our grassroots community."

Vàzquez Raña described the Summit with stakeholders as "very positive, friendly and constructive".

"We shared our view with the industry representatives," he said.

"We understand that change is never easy, especially when it involves industrial processes and business planning.

"We answered their questions, explaining the details of our decision process, and giving them an overview on the current situation."

The issue has divided shooting and became particularly ugly when the ISSF accused its own vice-president, Luciano Rossi, of spreading lies and making a series of "false accusations" with regards to the Tokyo 2020 changes.

The Italian claimed secretary general Franz Schreiber and fellow vice-president Gary Anderson had held secret talks with the IOC about the possible introduction of laser guns into the sport.

This was rejected by the ISSF.